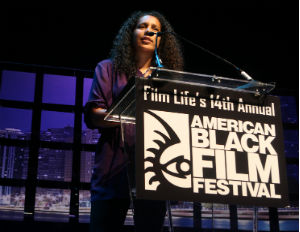 Appearing at last year’s Plunge Culture and Creativity Conference, produced by Black Enterprise and Film Life, to screen her film Beyond the Lights; Writer/Director Gina Prince-Bythewood is an American Black Film Festival [ABFF] favorite, having mentored thespian winners of ABFF’s Star Project. After her recent movie Beyond the Lights was Oscar nominated for best original song thanks to the Diane Warren written/Rita Ora performed “Grateful,â€ Bythewood is now working on a pilot for Fox and Imagine based around the #BlackLivesMatter movement. “That’s my hope for my films: that people can go see it and see something to aspire to,â€ she says. “But also change the perception and see our humanity.â€

[Related: NBCUniversal and ABFF Search for Next Screen Star with Star Project [DEADLINE to Enter: March 20]

Using art to combine activism and uplift the community has been the backbone of Bythewood’s work. Beginning her career as a writer working on television shows like A Different World, Felicity, and South Central, Bythewood’s passion is filmmaking. “I love making movies. It’s the only thing I want to do,â€ says the UCLA Film School graduate. “I want to entertain.â€

Known for typically directing projects she pens, her 2000 film Love & Basketball starring Omar Epps and Sanaa Lathan is a cult classic, drawing gossipy whispers of sequel dreams. While her follow-up, 2008’s The Secret Life of Bees, stars Queen Latifah, Dakota Fanning, Jennifer Hudson, Alicia Keys, and Sophie Okonedo. Her most recent movie, Beyond the Lights, helped bring discussions of self-love and mental illness in the black community to not only the big screen, but also high schools across the country. “I hope that I can be an activist through my work. But I would never make a film that doesn’t have something to say,â€ she says. “I think we have an opportunity to have a platform and have a voice. We’ve got to use it in a positive way. I hope that all my films speak to somebody in a positive way. And I hope that all my films speak to somebody in some sort of way.â€