Girls in Your Community Want You to Mentor Them 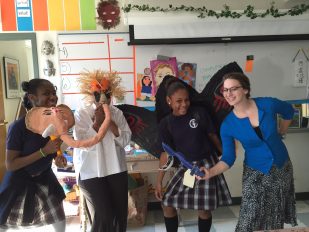 Ann Fudge, aÂ successful corporate executive who wasÂ a recipient of Glamour magazine’s Woman of the Year AwardÂ and is often written about in the pages of BLACK ENTERPRISE, is retired–sort of.

“I serve on several corporate boards and do a lot of traveling,â€ she told me recently. “So, it’s hard for me to say, ‘I’m retired.’â€

In addition to remaining involved in the corporate space, Fudge (wearing the mask in the photo, left) is pursuing a long-held dream: to volunteer in girls education, specifically with low-income girls of color.

Through a friend, Fudge learned about a remarkable school in Boston that’s making a great difference in the lives of young women during the critical middle school years: Mother Caroline Academy.

Rooted in the Catholic tradition, Mother Caroline Academy educates about 80 girls of all faiths in grades 4—8. Many live in Dorchester and hail from immigrant families.

The school is led by Ed Hudner, who professionalized the teaching staff, ending the school’s dependence on volunteer teachers to enable the pursuit of academic excellence. The difference shows. With professional teachers now making use of assessment data to inform their instruction, the students are being accepted into competitive high schools, including boarding schools as far away as California.

Fudge also told me about the Parenting Journey, a mandatory program. Led by Karen Dottin-Ricketts, the program helps parents support their daughters and become more invested in the school’s success. As a result, there is 100% parent engagement from those who complete it.

“The parents work as a team for their child’s success,â€ Fudge said. “Once a week they get together.â€

Fudge has worked to get speakers to come to the school and provide other opportunities for greater exposure. After reading Hidden Figures, she told the school about it. Then, one of the English teachers developed a unit study, which involved the girls writing from the perspective of one of the human NACA computers.

Mother Caroline Academy enjoys a 100% graduation rate; 82% of its graduates enroll in college, and 78% of them graduate in four years. (According to Complete College America, only a minority of students graduate on time.)

Fudge is impressed with the girls’ intelligence and confidence. In the U.S. poverty is often a barrier, but people like Hudner, Dottin-Ricketts, and Fudge are helping these students to leap over it.

Fudge urges others to get involved, as well. Dorchester isn’t the only community that has bright, low-income girls–or boys. “Find a way to get engaged in your community,â€ she said. “Even if you mentor just one child, it’s huge.â€ 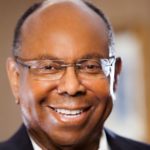