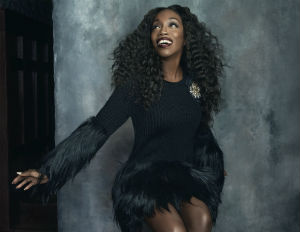 It’s almost that time. In just a few more weeks you will be completely entertained by the soulful sounds of Grammy Award winning artist, Estelle, as she gives Black Enterprise Golf & Tennis Challenge attendees everything they’ve bargained for–and then some. With all of the excitement surrounding this year’s performers, BlackEnterprise.com thought it imperative to catch up with Estelle to hear about what she has in store this Labor Day weekend September 3—6Â at the PGA Resort & Spa in Palm Beach Gardens, Florida.

BlackEnterprise.com: Tell us a little about your fourth album, True Romance, what was the inspiration behind the album and the title?

Estelle: Â The album is based on the quest for true love and romance. I have songs based on four themes, which indicate that between having courage, being passionate, and dealing with your bullsh*t you can find true romance.

What was the catalyst for creating your new empowering single “Conqueror”?

BlackEnterprise.com understands that you’re a new businesswoman having started your own label Established 1980 records. What inspired this leap into doing your own thing?

I’ve always done my own thing. This isn’t new, I started my recording career as an independent record label owner in 2001 and so this is my secondÂ go round with this.

What is the most noticeable difference between Estelle the artist and Estelle the businesswoman?

You’re known for singing, but lately it seems you’re venturing into acting–you’re even lending your voice to animation with Cartoon Network’s Steven Universe. What’s inspired this shift?

I’ve been doing Steven Universe since 2012. I have a lot of brothers and sisters so cartoons have been my life. I was auditioning for bit parts in television shows and films and I asked my team to get me a cartoon. The writer/creator of Steven Universe, Rebecca Sugar, wrote the part for me based on a music video I had creatively directed a while before, “Freak.â€

In addition to your music and your record label, you also run your foundation All of Me. Can you tell BlackEnterprise.com a little about the foundation and its mission?

All of Me is a mentoring foundation that doesn’t seek to reinvent the wheel but to offer support to those that are already doing it and in special cases help directly. We mentor young adults ages 14—22. I believe that travel, mentorship, and just being given the opportunity to do something great does more than a having something placed in your lap. We aim to do just that. Our mission is “it takes a villageâ€.
(Continued on next page)