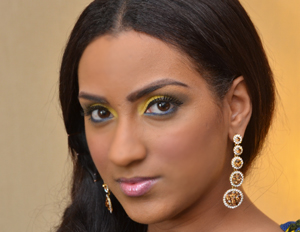 The race to bring African film, comedy, and dramatic series to the United States took another positive turn this year when MultiChoice, a television platform for African film and television original content, launched Africa Magic GO, a video-on-demand service aimed at Africans and African Americans living in the Diaspora.

In August, the network appointed acclaimed Ghanaian actress Juliet Ibrahim as one of its ambassadors to help push the brand, generate traffic, and increase viewership.

Driven and determined, Ibrahim was recently in the U.S. to support the network and to attend a movie award ceremony in Los Angeles. She also recently completed filming 30 Days in Atlanta with Vivica Fox and Lynn Whitfield, a movie produced by Ayo Makun, an award-winning Nigerian actor and entertainer, and directed by Robert Peters.

Upon being made ambassador, Ibrahim says she was humbled and flattered by the honor. “It’s a way for Africans in the diaspora to stay in touch with events back home,” she says. “Film is a medium. My fans can actually watch my movies and a rundown of other African hit movies online without waiting for the DVD’s back home. It’s just a great platform for anyone serious about watching African film, television shows and programs that are happening in Africa. It’s not limited to only Ghana or Nigeria — South African programming is uploaded there as well.”

Many around the world have been paying attention to the continent in industries from business to politics to entertainment. According to Ken Onwu, Product Manager for Africa Magic GO, “There is a growing interest in stories from Africa told from an African perspective.” Onwu says, “Given the limited quality of African content available in the Diaspora, Africa Magic GO provides audiences with great programming from across the entire continent. Juliet Ibrahim is a multitalented Ghanaian actress, film producer, singer, and humanitarian of Lebanese, Liberian, and Ghanaian descent. Her philanthropic endeavors and commitment to helping and inspiring Africans all over the world through her acting made working with Juliet an incredibly easy decision and an absolute pleasure.”

Learn more about Ibrahim’s role, career journey and success on the next page …