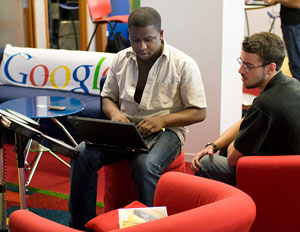 Google has relaxed the regulations to allow more minority businesses to participate in its supplier program. (Image credit: Google)

At the 18th Annual Rainbow Push Wall Street Project Economic Summit, leaders like the Reverend Jesse Jackson spoke on topics as diverse as the business of hip-hop to the current state of Silicon Valley’s diversity.

In addition to Intel’s game-changing announcement of a $300 million initiative to improve diversity at the company and beyond, search giant Google appeared on the third day of the summit to announce its own program to improve diversity, but at the business level.

The Google Small Business Supplier Diversity Program is designed to help minority-owned businesses interact with Google to spur growth both online and offline.

Allison Bernstein, Diversity Markets Program Manager, spoke to the audience about Google’s newest initiative for small businesses, which piggybacks off its previous program that encouraged small businesses to improve their presence online.

“We want you to use this to create more opportunity for folks in your own communities, for your business,” said Bernstein.
Working as a Google employee has its benefits, and working with Google as a minority business also has a few perks.

First off, businesses that work with Google will be included in the company’s supplier database, and will be displayed as a minority-owned business. Suppliers will receive a 25% discount on Google Apps for Work, the company’s work productivity suite of software. Suppliers can also opt into the Accelerate With Google Academy program to improve their business’ online presence.

To qualify for the Google Small Business Supplier Diversity Program, a company must satisfy three requirements:

Bernstein assured the audience that “no special certificationâ€ is required to participate in the program, thanks to Google’s attempts at making it easier for minority businesses to cooperate with the company.

Bernstein was unable to comment on the success of the company’s supplier diversity initiative, as it began in November, but stated that Google would release information about its progress later in the year.