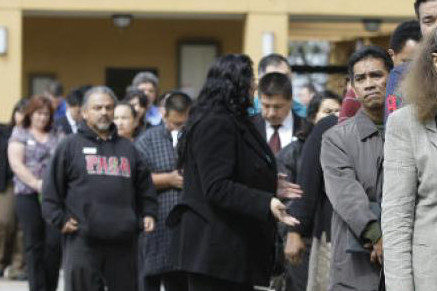 Three Republican governors have announced plans to cut expanded federal jobless benefits, arguing that an extra $300 a week is keeping people from working.

The governors of Arkansas (Asa Hutchinson), Montana (Greg Gianforte) and South Carolina (Henry McMaster) are all cutting federal unemployment benefits to push their constituents to leave the safety of their homes and retain full-time employment.

The announcements come after the Labor Department announced a woeful 266,000 jobs added in April. Economists expected about 1 million jobs to be added. The Chamber of Commerce is also pushing Congress to end extended federal unemployment benefits before they expire this fall.

The Biden administration and Democrats argue the benefits are providing help to families across the country who are not returning to work for a variety of reasons. Millions of Americans know someone who has died from coronavirus and still fear catching it. Women are also staying home as adequate childcare options are unavailable or unaffordable. Additionally, the number of Americans willing to take the vaccine is dropping.

“The case that labor shortages are slowing jobs growth is stronger today than it was yesterday, however the jury is still out on how much enhanced unemployment benefits are a contributing factor,” Daniel Zhao, senior economist at Glassdoor told The Hill.

Zhao added that one-time bonus checks and even higher wages do not solve childcare needs and pre-existing conditions or other health risks of coronavirus.

Another reason jobs aren’t being filled is that some do not provide enough benefits. The pandemic showed just how important healthcare and other benefits are. However, jobs in the hospitality and service fields typically come without healthcare or other benefits that have been paramount to survival in the pandemic, meaning they’ll struggle to retain employees since what Americans value in a job has changed.

President Biden is confident job numbers will increase as vaccinations continue, states begin to reopen, and the economy balances itself out. However, more Republican states are expected to follow Arkansas, Montana, and South Carolina.