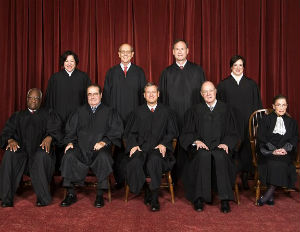 Â [Related: How the Presidential Candidates Are Reacting to the Violence at Trump’s Rallies]

At a press conference held in the Rose Garden, Obama praised Garland’s life-long devotion to the law and public service, noting the 50% pay cut Garland took when he accepted a no-frills job as a federal prosecutor in George W. Bush’s administration.

Addressing GOP threats to not even allow an Obama nominee a hearing, the president highlighted Merrick’s confirmation to the D.C. Circuit Court, during which he received unanimous, bipartisan support.

President Obama even offered a direct quote from Republican Senator Orrin Hatch, who at that time was the chairman of the Senate Judiciary Committee: “In all honesty, I would like to see one person come to this floor and say one reason why Merrick Garland does not deserve this position.

When Garland approached the podium to deliver his remarks, he was noticeably emotional, as he called his nomination “the greater honor of my life,” with the exception of his wife agreeing to marry him 28 years ago. Garland quickly ran through his accomplishments, such as prosecuting the Oklahoma City bombing case and taking down gangs in New York.

During the press conference, ThinkProgress put out a list of quotes from the notable GOP heavyweights who have supported Garland in the past. The list includes Senate Judiciary Committee Chairman Charles Grassley, Sen. Orrin Hatch, Sen. Jeff Sessions (a Trump endorsee), and Sen. Strom Thurmond, infamous opposer of integration.

It didn’t take long for GOP leadership to express their dissent, with House Speaker Paul Ryan (R-Wis.) insisting that “this has never been about who the nominee is.” Maintaining that the Senate is justified in refusing to confirm a nominee, Ryan argued that the “American people decide the direction of the court.”

Senate Judiciary Committee Charles Grassley is also refusing to allow a hearing, stating the majority of the Senate had “decided to fulfill its constitutional role of advice and consent by withholding support for the nomination during a presidential election year, with millions of votes having been cast in highly charged contests.”