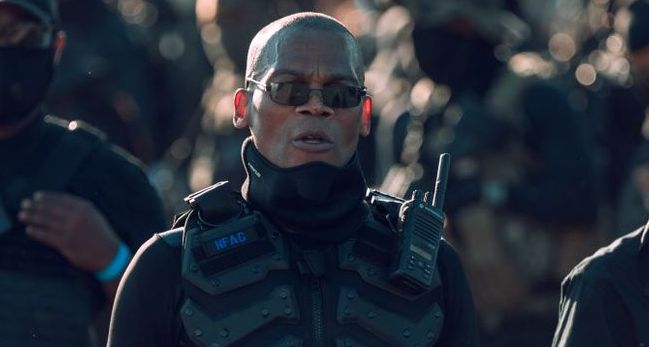 (Image: Twitter)
The Western District of Kentucky of the U.S. Attorney’s Office has announced that John F. Johnson, also known as “Grandmaster Jay,” has been charged with assaulting federal task force officers.

United States Attorney Russell Coleman made the announcement last week. “Here in Kentucky, we revere our First and Second Amendment freedoms, not foolishness which puts police and protesters at grave risk.”

Grandmaster Jay is the founder of the “Not F*****g Around Coalition” (NFAC). NFAC is a Black nationalist paramilitary organization based in the United States that advocates for Black liberation and separatism.

Johnson, 57, who is from West Chester, Ohio, had been arrested at his residence on December 3, 2020, and appeared before a federal judge in Louisville last week.

The criminal complaint states that Johnson had “forcibly assaulted, resisted, opposed, impeded, intimidated, and interfered with federally deputized task force officers while they were engaged in or on account of the performance of official duties, when Johnson aimed a rifle at them on September 4, 2020, in Louisville, Kentucky.”

He is accused of brandishing an AR platform rifle at officers for the Federal Bureau of Investigation (FBI) the U.S. Secret Service, and Louisville Metro Police Department. The task force officers were on the roof of the Jefferson County Grand Jury Building keeping watch on Jefferson Square Park where there were armed protestors gathering.

“The FBI respects the rights of individuals to peacefully exercise their First Amendment rights,” said FBI Louisville Division SAC Robert Brown. “Our mission of protecting the American people and upholding the Constitution is dual and simultaneous, not contradictory. Accordingly, we are committed to investigating violent behavior and those who are exploiting legitimate, peaceful protests and engaging in violations of federal law.”

If Johnson is convicted at trial, he faces the statutory maximum sentence of 20 years in federal prison.