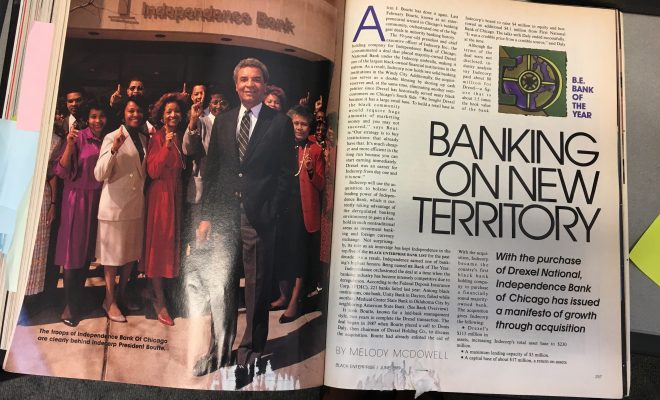 Today we reveal No. 38 in the web series “Great Moments in Black Business.”

1988: Independence Bank of Chicago makes history with its acquisition of Drexel National, the first time ever an African American institution bought a healthy white-owned financial institution.

The advertisement revealed pictures of dead presidents—Lincoln, Jackson, Grant—with a catchy tagline: “We’d be very happy to see a few new faces at our banks.” The ad would also communicate the historic milestone as part of its customer service message: “We formed the largest black-owned bank holding company in America to serve the needs of communities like yours.”

Roughly two years before that ad’s appearance in BLACK ENTERPRISE and other black periodicals, the late Alvin J. Boutte—the man lauded as “an entrepreneurial wizard in Chicago’s banking community”—performed a bit of deal-making magic. In 1988, the president and CEO of Indecorp, the holding company of the nation’s fifth largest black bank, Independence Bank of Chicago, completed the landmark acquisition of majority-owned Drexel National Bank, also located in the Windy City.

The transaction, which brought Drexel under the Indecorp’s umbrella, marked the first time that a black-controlled financial institution purchased a solid white-owned banking establishment. In fact, at that time, the acquisition represented one of the largest deals in minority banking history.

Analysts had estimated that Indecorp paid roughly $8 million—about 1.5 times book value —for Drexel. It was a bargain: Boutte gained $109 million in additional assets, $3 million in lending capacity, two new branches, $50 million in passbook savings accounts and Drexel’s 20,000 customers. One of the nation’s most prominent black financial institutions, Independence had assets of $118 million in 1998. Due to the groundbreaking acquisition, BE recognized Independence as the 1989 Bank of the Year.

By 1990, Indecorp had two institutions, Independence (No. 5) and Drexel (No. 6), on the 37-member BE Banks list. Collectively, Indecorp’s total assets were roughly $227 million. The 1990 bank list leader: rival Seaway National Bank of Chicago with assets of $164 million was now dwarfed by the size of its chief competitor. “We have acquired a sleeping giant with enormous earnings potential,” Boutte told BE at the time of the deal. “Our combined lending limit doubles with this acquisition. We can now take larger positions in deals throughout the city.”

Spirit of An Entrepreneur

The astute, focused Boutte was the right man to operate the institution. The spirit of an entrepreneur coursed through the Lake Charles, Louisiana, native and Xavier University-educated pharmacist who founded Independent Drug Stores and built it into the nation’s largest black-owned pharmacy chain. After selling his business, he was tapped to become president of Independence in 1970.

Despite the bank being robbed on his first day, Boutte was extremely excited about its growth prospects. Launched in 1964 by investors like George Johnson, president of Johnson Products Co., the maker of haircare products such as Afro Sheen and Ultra Sheen, the bank had pretty much languished. Boutte put in place a multipronged plan that included developing an aggressive marketing campaign to attract corporate and government customers; assembling an experienced staff to execute on his initiatives; and expanding its loan portfolio.

Over the course of a decade, he persuaded major corporations such as Shell Oil and American Hospital Supply to become clients as well as structured a $30 million revolving loan agreement with Sears, Roebuck & Co. with Independence leading a consortium of 60 minority banks to handle the retailer’s credit and lending needs. Moreover, he took over the deposits of two failed institutions, increasing the bank’s assets by more than 35% in 1979. Within 10 years, from 1970 to 1980, he increased assets from a mere $11 million to a whopping $100 million. During this period, he also created the holding company Indecorp as a vehicle to acquire other financial institutions.

After the Drexel deal in 1988, Boutte sought to take advantage of a deregulated banking environment by crafting an audacious strategy focused on acquisitions and alliances. With increased lending power, Indecorp broke new ground for black banks in areas like foreign currency exchange, trust services, and municipal bond underwriting. In fact, the holding company also became the first black institution to engage in a joint venture with a majority investment bank, Kane McKenna and Associates, the Chicago affiliate of Robert W. Baird, a diversified financial services firm.

But Indecorp CEO Boutte and its Chairman George E. Johnson would fail in their bid to make history a second time by creating the first black interstate banking operation. By 1993, Boutte and George Johnson had decided to put Indecorp on the auction block. Its suitor: Omnibanc Corp., a Detroit-based black financial holding company with just $23 million in assets. Omnibanc’s Chairman William Johnson gained capital from former Detroit Pistons superstar Isiah Thomas and other investors to meet Indecorp’s $35 million price tag. After Boutte and William Johnson shook on the deal in September 1993, all parties had to wait for Federal Reserve approval.

The deal, however, unraveled due to timing and interest rates.

Over the course of a year, the Fed raised interest rates to keep inflation at bay. However, the hike depressed the value of Indecorp’s bond portfolio, which represented two-thirds of its assets. Reviewing the books again, Johnson decided to shave the offering price to $26 million. Boutte wouldn’t budge. The Fed’s approval expired December 1994 and so did the deal.

Indecorp was eventually sold. In 1995, much to the disappointment of thousands of black Chicagoans, majority-owned ShoreBank Corp., the holding company for South Shore Bank in Chicago, acquired Indecorp, which, in turn, lost its black ownership status.

As for Omnibanc: It was seized by the Federal Deposit Insurance Corp. and then the failed institutions were sold in 1988. The acquirer: ShoreBank Corp.