Green Gets You Laughing 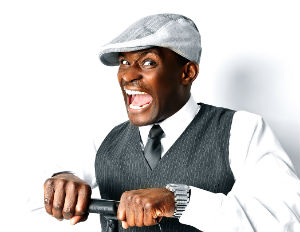 In just two short weeks, excited professionals, colleagues and friends will gather for a weekend of fun, fitness, games, and laughter at the Black Enterprise Golf & Tennis Challenge. As a treat for attendees, multi-talented comedian Kareem Green will hit the stage for an evening of gut-busting merriment as he shares his life’s observations, experiences, and truths. You may recognize Green from BET’s Comic View, TV One’s Bill Bellamy’s Who’s Got Jokes and Comedy Central’s Russell Simmons presents the Ruckus. Now, you will be able to know what exactly it is that’s so funny for yourself.

BlackEnterprise.com was recently afforded the opportunity to chat with the three-time Showtime at the Apollo champion to hear a little about his achievements, aspirations and motivation. Check him out.

BlackEnterprise.com: When did you realize you had a knack for comedy?

Green: I never really realized it. I liked being funny, but what happened for me is that I kept getting fired. After that kept happening I figured I had to come up with something to do. I talk to myself a lot. I have a lot of good conversation with me, so I asked myself ‘what do I like to do?’ Well, I love to make people laugh so I went ahead and tried it.

What inspires your material?

Life. I’m a realist. I speak mostly truth–often exaggerated truth–especially on things that happen to me or the way I see things.

What sets you apart?

I’m honest, I’m witty, and I’m hood. I tell stories of things that have happened and situations I’ve been in. I don’t really discuss other people unless it’s something current.

What is your greatest fear as a comedian?

I’ve been through a lot. I’ve gotten in altercations on stage, you name it. I’m not generally afraid when it comes to hecklers, but it all depends. There are 2 types of hecklers: the heckler that thinks he’s funnier than you and the heckler that is over ‘yessing’ what you’re doing. The one that offends me is the one who thinks he’s funnier than me. They try to steal your show. I try to make a nice, strong example to let them know the difference between us. That’s no real fear though. Sometimes, I’m afraid I won’t have anything to say. That’s when I most heavily rely on improvisation.

Do you consider yourself to have a specific style as a comedian? If so, what would that be?

I’m a quick-witted story teller. I’m great with improv, and though I’m not too physical; like a Jim Carey physical, I am like a Richard Pryor, Damon Wayans type of physical. I try to paint the picture with just enough.