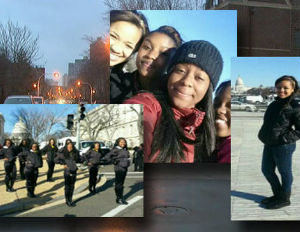 Gun violence seems to be increasing on an hourly basis, and kids are scared. In the past 72 hours at least three youth shootings have headlined the news across the country including Chicago’s 15-year-old Hadiya Pendleton, who was gunned down in a gang-related shooting yesterday (January 31).

Pendleton, a sophomore at King College Prep High School, and recent performer at the 2013 Inauguration with her school band, was shot when a gunman opened fire in an alley near Vivian Gordon Harsh Park. But before the promising student took her last breath at a Chicago hospital, she and fellow classmate, Amari, made a public service announcement telling kids to say “Noâ€ to gangs. The PSA video was made in 2008 as an anti-gang violence message.

In a senate hearing on gun violence, Senator Richard Durbin, D-III said, “It was the highlight of her young 15-year-old life.â€ He continued, “Just a matter of days after the happiest day of her life, she’s gone.â€

Pendleton is just one of the 157 shootings and 42 homicides that has already occurred in Chicago since 2013 began. Chicago surpassed 500 murders last year.