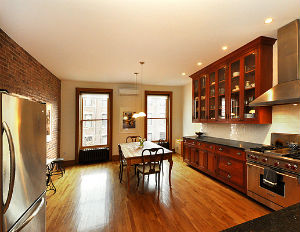 The interior of a brownstone on W. 121st St. in Harlem, which recently sold for $3 million.

If the estimable and always plugged in Harlem + Bespoke blog is right, a Harlem brownstone will soon be the highest selling real estate dwelling (sorry) in the historic neighborhood this year.

The home was reportedly closed on in August, selling over the asking price of $2.85 million, according to the blog.

The building at 357 West 121st Street is near a popular public park, close to public transportation and several shops and restaurants including the soon-to-be-extinct Lenox Lounge. If it stands as the most expensive sale, it will put an exclamation mark on moderately brisk year of home and condo sales in Harlem. However, the neighborhood pales in comparison a locale, just some 40 blocks away, which Forbes recently called the most expensive zip code in America. It’s section of the Upper East Side of Manhattan (zip code: 10065) which has a median home price of $6,534,430. Forbes says homes for sale there spend an average of 449 days on the market.

For information on pictures and the sale in Harlem, visit Harlem + Bespoke.