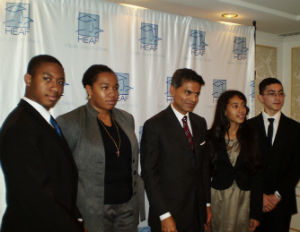 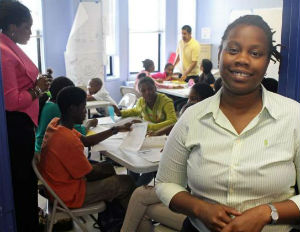 “These are all competitive, HEAF-approved programs vetted by data from the Department of Education,â€ McGee says, “that will prepare our students to successfully complete four-year colleges.â€

College juniors and seniors can compete for admission to a HEAF fellows program that involves a week-long series of informational interviews with leaders from the for-profit, nonprofit, and government sectors, says McGee. Through these interviews the students make contacts in areas such as media and finance that can lead to a range of experiences, including internships.

According to 23-year-old alums Yinette Fernandez, an investment governance business analyst at a top investment bank, and Kamal Bryan, a professional intern who assists with the research of and communication with child welfare organizations in New York state, HEAF prepared them well for college, academically and in terms of time management skills.

“HEAF also has its own scholarships,â€ says Bryan, “and the staff help you with the scholarship application process.â€ Both Fernandez and Bryan are still involved with HEAF on an informal basis.

At its recent annual benefit dinner, HEAF raised more than $1 million. The organization receives 600 applications a year and now serves 500 students in sixth grade through college. With greater funding, it hopes to serve more.

A HEAF student at the dinner may have paid the organization one of its highest compliments: Mervyn Larrier, now a high school senior who plans to pursue biomedical engineering and is applying to Johns Hopkins, Drexel, and Rensselaer, put it succinctly: “HEAF teaches you not to give up.â€

Indeed, one of its mottoes is persistence.

For more about HEAF, go to www.heaf.org.