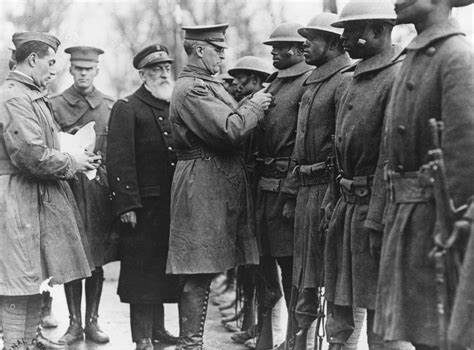 Harlem Hellfighters, an infantry regiment of the New York Army National Guard during World War I and World War II, could be honored with gold medals, ABC7 reported.

Harlem Hellfighters might receive a Congressional Gold Medal in their honor if Congressman Tom Suozzi gets his bill passed.

The Congressional Gold Medal is an award given by those in Congress who believe the recipient is long overdue in getting recognition.

Related stories: HAVE WE LOST HARLEM?

“They never lost an inch of ground, suffered many injuries but never had anyone taken as a POW,” Suozzi said in a statement. “A great failure of this country is how we treated African Americans throughout our history, and this is just another example of it.”

Assemblyman Keith Wright, whose grandfather was a Harlem Hellfighter, said, “When they came home, it was almost as if they had no home to come back to,” Wright said. “Fought for freedom of another country, but they didn’t find freedom themselves.”

Established in 1913 as the 369th Infantry Regiment, the Black community in Harlem sought to create a military unit to serve the country. It wasn’t until then-New York Gov. William Sulzer passed legislation were they enabled to form a Black Nation Guards unit.

Regardless, the men of the Harlem Hellfighters were met with racism from their own white political leaders as they went on tour to Europe, NewsOne reported.

The unit fought under the French Army because white American soldiers refused to fight alongside them. However cruel this may be, the French Army regarded the Harlem Hellfighters as heroes, having successfully continued their fight with passion, ABC 7 reported.

On Feb. 17, 1919, The Harlem Hellfighters received military awards from the U.S., and a victory parade was hosted.