'Harley and the Davidson's': The First Black Motorcycle Dealer 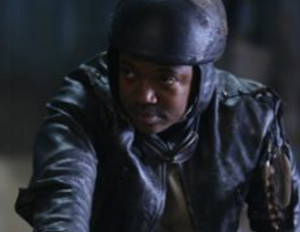 African American riders have embraced the Harley-Davidson culture for decades, and it all started with the passion and purpose of William B. Johnson–the first African American Harley-Davidson motorcycle dealer. Starting on Monday, September 5, Discovery Channel will present a three-part miniseries, Harley and the Davidsons. The series will chart how Harley-Davidson founders, Walter and Arthur Davidson and Bill Harley, built this symbol of Americana from the ground up.

Black Enterprise had the chance to speak with Stephen Rider, who plays Johnson in Harley and the Davidsons. Rider kindly gaveÂ us some insight on playing the role of this unsung hero.

BE: There’s not much public research out there on Johnson. Aside from being the first black dealer and licensed competitor for a national motorcycle competition, can you give us a little insight into who William B. Johnson was?

Rider: Harley-Davidson is so American, because they constantly challenged the status quo. They weren’t Rockefellers, you know? They came from Milwaukee. They were two brothers and a friend, and they faced a lot of challenges along the way.

Harley and the Davidsons were the first to give Johnson, a black man, the opportunity to own a dealership. Unless you actually go to the Harley-Davidson museum, you don’t even know who William B. Johnson is. Once people watch this, they’ll realize what type of impact he had. There are so many different groups of people with motorcycle clubs that are directly influenced by him, although they might not consciously know it.

BE: How did you approach the character, with such limited resources?

Rider:Â The story was inspired by true events. In the 1930’s, during the Great Depression, Harley-Davidson knew that Johnson loved and respected riding, and they gave him the opportunity to do what he loved. However, that was very uncommon.

William B. Johnson was [actually] from New York, but the writers placed him in the Milwaukee setting. They wanted to make sure it fit into the story because that is a huge part of it. I have to not only look at the man, but [also] what the writers are trying to do with Johnson in the story. I consider what kind of story are they trying to tell, and what to reveal about the character in relation to the author’s intention, within the style of the story. There’s so much more I wish I knew about him, honestly.

BE: After playing this role, what did you take away from the legacy of William B. Johnson?

Rider:Â Courage–he was a very courageous person. He was clear on what he was trying to accomplish in his life, and not just professionally; he understood his purpose. We live in an age now where most people don’t understand their purpose at all. They just want to be famous, or they just want to achieve the American Dream. They have the perception of what this country and the world teaches them, but they haven’t necessarily asked those questions themselves. This is a man who ultimately loved riding. He loved to be free, and what Johnson strived to accomplish aligned with the mission of Harley-Davidson.

Rider currently stars in the role of Blake Tower, for season two of DaredevilÂ on Netflix. His other credits include Lee Daniels’ The Butler and Safe House.