HBCUs Invest in Students and Get Results 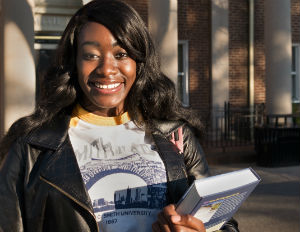 When Hajira Attah graduated from high school in 2013, she wanted to be the first one in her family to go to college. But no school considered her college material. SheÂ had a 1.7 GPA and low SAT scores. All eight colleges she applied to rejected her.

[Related: Meeting Students Where They Are]

Her college ambitions might have ended there. But then she heard about Johnson C. Smith University. It was the one school willing to “take a riskâ€ on her, she says. Even though she didn’t meet the school’s GPA or test score requirements, Johnson C. Smith saw a potential in Hajira that others did not.

They accepted her into a special first-year program to help low-income, first-generation college students get a chance to obtain a college degree. Their bet on Hajira has paid off. She’s now a junior majoring in history with more than a 3.6 GPA and her eyes on graduate school.

I had a chance to meet Hajira last month in Seattle along with a group of other students from both Johnson C. Smith and Delaware State Universities. It was inspiring to hear their stories. According to higher education statistics, the majority of low-income students like themselves will not finish their degrees. But the students I met are committed to beating those odds.

While each student told a unique story of the struggles they had to overcome to get an education, they all shared one thing in common. At a critical point in their lives, their schools believed in them when others did not.

There are plenty of reasons to get a college degree. More career options. Higher incomes. A chance to learn more about the world and leave your mark on it. Meeting Hajira and the other students, I was reminded that the most important reason to go to college is not just a diploma, but a greater sense of self-worth and purpose in your life.

Hajira, Kyle, Selena, Edgar, Katherine, Earlee, and Austin, thanks for the great conversation.

Good luck in college and in your careers.

This post was written by Bill Gates, co-founder of the Bill & Melinda Gates Foundation.