HBCUs Stand Together in #JusticeForMikeBrown 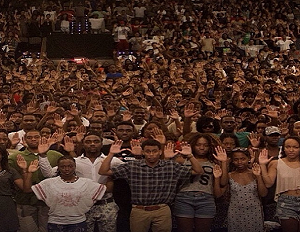 When news broke last Saturday that unarmed teen, Michael Brown, of Ferguson, Missouri had been killed by a local police office, there was a national outcry for justice to be served.

Citizens in Ferguson rioted and protested against police, expressing anger over a justice system that once again has failed to protect a black life.

Brown, 18, reportedly put his hands up and surrendered to police before being shot multiple times, by a police officer whose identity took days to be released. Yesterday, a national moment of silence was held as peaceful protests took place across the nation in honor of the teen. The hashtag #NMOS14 was spread across social media as protesters marched through the streets of their city yelling “Hands up, don’t shoot” and “No justice, no peace,” as they demanded an end to police brutality and justice be brought to the Brown family.

Recognizing that everyone of us is a Michael Brown, Trayvon Martin, Renisha McBride, Eric Gardner, as is every other black life that has been taken away at the hands of police, HBCUs across the country came together for a powerful photo showing students in a surrendering position with their hands up like Michael Brown.

Take a look to see what black colleges have unified to show their support in #justiceformikebrown.