Help! My Co-worker is a Psychopath! 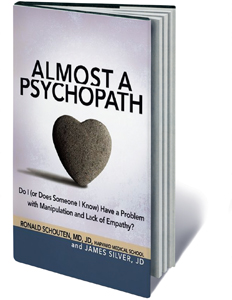 Do you have a co-worker who is chronically manipulative? Do they often take credit for work that they did not do? Do they lie about everything from their accomplishments to what they ate for lunch? If so, you may be working with someone who is almost a psychopath. Outside of psychiatric circles, it’s a term used loosely, particularly while venting to family or friends about a co-worker’s off-putting behavior. But it may, in fact, be a close explanation for such manipulative activity.

“This is someone who lacks empathy for other people,â€ says James Silver, a criminal defense attorney, former federal prosecutor, and co-author of Almost A Psychopath: Do I (or Does Someone I Know) Have a Problem with Manipulation and Lack of Empathy? (Hazelden; $14.95). “They are always focused on gratifying their own personal needs. Manipulation and chronic lying are simply tools that they use to function in everyday life.â€
In the book, Silver and co-author Ronald Schouten, M.D., J.D., director of Law and Psychiatry Service at Massachusetts General Hospital in Boston, identify a psychopath as one who shows a profound lack of empathy for other people and their feelings, extreme narcissism, and a willingness to engage in immoral and antisocial behavior for short-term gains.

The difference, however, between a psychopath and someone operating on the periphery is based on the degree and frequency of these behaviors. The almost psychopath is capable of living more easily among the general population and maintaining relationships–unlike someone with full-blown psychopathy, whose behaviors are more likely to be noticed eventually.

Some writers in the field have suggested that almost psychopaths are especially attracted to the business world, and Schouten notes that the authors’ experience indicates that some traits found in psychopaths and almost psychopaths, such as manipulating politics and relationships, particularly with people in high authority, can offer advantages in competing for advancement.Â  “They are good at managing up and are remorseless about doing in their colleagues and those that work under them,â€ explains Schouten.

Unlike most social environments, it may be difficult to avoid encounters with such an individual on the job.

– Keep a record. Document instances in which you believe the person has intentionally lied or has been manipulative. “These folks are successful because of their ability to take advantage of the better nature of the rest of us,â€ says Schouten. “They can use their overconfidence and ability to manipulate others to make you think that you are mistaken about what is going on.â€ To verify their behavior, consult with other co-workers and ask if they have noticed anything strange.

-Â  State your case. When you speak to your supervisor or human resources, approach the problem as an issue for the organization as opposed to just a conflict between you and another employee. For example, “I want to talk with you about a problem I am seeing that is having an effect not only on me, but on the whole group, and I think it may raise some real risk issues for the organization,â€ explains Schouten. “You’ve talked about risk and productivity, not just for yourself, but for other people in the organization.â€ Be prepared for your supervisor or HR not to follow up on your claim, since psychopaths will often have their own champions in the organization. Do your best to identify a neutral party.

– Move on. If no action is taken against the person, try asking to move to another division or team. Silver says you may have to consider leaving the company if working with the person is unbearable and affecting your performance. “Don’t feel bad if you’ve been manipulated or conned,â€ he says. “The problem is not yours. These people are good at what they do.â€