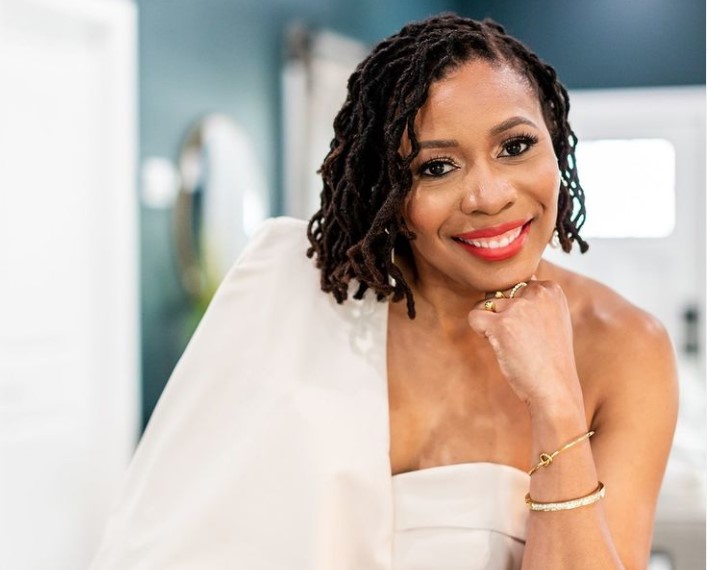 Money coach April Stewart isn’t your average millionaire success story. The DC Native became part of an elite group of individuals to reach millionaire status in their 30s. However, she didn’t focus on real estate, stocks, or entrepreneurship to achieve her goal.

Stewart, also known as April The Money Coach, turned her six-figure salary from her full-time job into a million dollar net worth, Business Insider reported. She transformed her relationship with money and developed a better money story. Now she’s teaching others how to become a self-made millionaire.

“Every woman deserves to build wealth” Stewart wrote on Instagram. “Once I gained insight into exactly what I was doing with money, I was able to transform my relationship with it. Through the right approach to budgeting, debt elimination, saving, and investing, I became a self-made millionaire in my 30s.”
⁠
She continues, “Now I teach high-achieving women how to create a plan to become millionaires using your income alone.”

Taking Control of Your Money

Stewart wasn’t always money savvy. Growing up, she was not taught about abundance and money management.

“I wasn’t taught about money [growing up] except that ‘there wasn’t enough of it’ and that ‘it was hard to come by,'” Stewart told Business Insider.

Stewart climbed the ladder and earned a six-figure income to overcome money barriers. But that wasn’t enough. She still lived paycheck to paycheck and didn’t understand how to build wealth.

“No one really looks at us and thinks that we have the potential to become millionaires,” Stewart told Forbes. “So we’re not taught about building wealth in schools and in our families. And then sometimes, there are those who have some money, have a good job and accumulate something but often have a tax of helping family members, which can drag on their wealth building potential.”

Stewart was determined to change her money story. She didn’t inherit good money habits, but she was going to position herself to pass it on to others.

“I began to study personal finance,” Stewart shared in her blog. “Educating myself about money and implementing what I learned, literally transformed my life.  ⁠Before I knew it, I had accumulated over $1M in assets, becoming a self-made millionaire in my 30s!”

She adds, “And that’s where the accidental part comes in. I didn’t have a goal to become a millionaire. It was a result of doing smart and intentional things with my money over time. It wasn’t until I did a net worth calculation that I realized I had hit the million-dollar mark.”

Stewart’s first step on her net worth journey was to educate herself about money. She immersed herself in personal finance books, interviews, and television shows. Three books that changed her money perspective were I Will Teach You To Be Rich⁠ by Ramit Sethi⁠, Everyday Millionaires⁠ by Chris Hogan⁠, and Unshakeable⁠ by Tony Robbins⁠.

Then, Stewart vowed to take control of her finances by budgeting. She tracked her income and expenses to determine where her money was going. Knowing her numbers allowed her to manage her cash flow in a way that aligned with her lifestyle.

Eliminating worthless debt is an important step to financial freedom. In 2008, Stewart achieved her goal of paying off over $25,000 worth of debt.

After paying off debt, Stewart reallocated her money. She invested in the stock market and benefited from compound interest.

“I’m a long-term investor that doesn’t try to beat the market,” Stewart shared in a blog post. “Because guess what?  Most everyone is horrible at it.  I implement a solid investment strategy and hold onto my investments for the long-term.”

Building wealth doesn’t happen overnight. Sometimes it may be hard to do it alone. Stewart invested in coaching to achieve her money goals. Now she coaches other people who want to use their paycheck to build their net worth.

“We all have to decision to make,” Stewart wrote on Instagram. “I’ve simply decided to remain consistent and committed to learning and improving.”