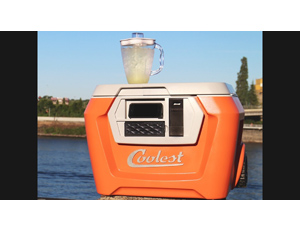 Kickstarter has proven to be a great way to get your dream idea off the ground. It’s been especially advantageous to tech startups that often have high-costs needs for developing and manufacturing products.

However, things can turn ugly very fast on Kickstarter if you overpromise: take people’s money, and then don’t deliver the goods as one startup discovered.

The Coolest CoolerÂ is not just any old cooler for your beer. It’s a “smartâ€ cooler with a built-in waterproof Bluetooth speaker and a built-in device charger.

The 55-quart cooler also has an LED-lit lid, wheels, a built-in blender, utensil storage, and other unique features.

At the time it launched, the Coolest Cooler was the most popular Kickstarter of all time, raising $13 million, reports Motherboard.

At launch, the purchase price was from $165-$225. Then, as Motherboard’s Jason Koebler writes, a shortage of blender motors at a manufacturing plant in China sent the manufacturing costs of the cooler skyrocketing. The cooler is now selling for $400.

The problem was that the company initially sold the cooler at too low of a price, said its creator Ryan Grepper. They did not correctly calculate manufacturing costs and certainly did not foresee a parts shortage.

To make up for the costs and the fact that the company is quickly running out of the $13 million it raised, they came up with the somewhat misguided idea to charge customers who had not yet received their cooler, an additional $97 for “expedited delivery.â€

“We would allow backers to pay for the remaining cost of their Coolest to get it faster, with a guaranteed delivery date before July 4,â€ Grepper wrote on the company’s site. “We are open to this option and exploring it here because you have asked us to do so.â€

That did not go over well. According to Motherboard, “after sending out [that] update, Coolest employees were threatened and doxxed (the practice of broadcasting personal information about an individual).â€ The marketing manager’s e-mail rang nonstop with calls from angry Kickstarter backers.

There is also a host of bad reviews on the Amazon page for the cooler, perhaps fueled by anger over the pricing.

The company apparently has backed off on the additional charge idea as it looks for ways to raise additional needed funds.

It’s a good lesson about how even something as easy to launch as a Kickstarter project requires a lot of thought and planning as would be required to pitch to a VC.

In 2013, Seth Quest, the entrepreneur behind an iPad stand known as the Hanfree discovered there’s a fourth possible outcome from a failed Kickstarter campaign–a lawsuit and bankruptcy.

For advice on using Kickstarter to fund your project, check out Black Enterprise’s “How to Effectively Fund A Project on Kickstarter.â€