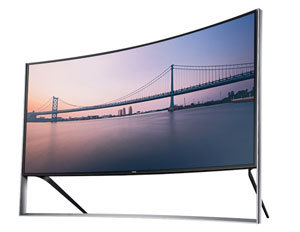 If you do, then by all means. But if not, feel free to stare and gawk at the electronics giant’s newest impulse buy: the 3D, curvy-screened, 105-inch, Samsung Smart UN105S9 UHD TV.

The giant of a television has a curved display, supposedly used to reduce glare, 3D functionality, and can display up to four live television feeds at once, thanks to its monstrous size. It can also upscale 1080p content to near-Ultra HD resolution, through its proprietary algorithm.

But before you buy this product of pure excess, consider this: 4K (or Ultra HD) content is few and far between, and if you can find it, you might not even have the right 4K television to view it.

Both television giants Sony and Samsung have their own line of 4K televisions, but they don’t display the same content. In fact, if you want to watch 4K content from either Sony or Samsung, you have to own a Sony or Samsung-made television, turning Sony’s offering of content into a sort of walled garden.

Samsung has its own 4K content box, and it’s a lot cheaper, but has less than a dozen movies on it. Even if you wanted it, you’ll likely never be able to spot the difference between 1080p and 4K content unless you’re sitting pretty far away from your television.

According to CNET, your eyes are already bad at telling the difference between 720p and 1080p content, so cranking it up to 4K resolution won’t really do much to improve your viewing experience.

In the end, Samsung’s latest monstrosity of a television would be great for watching four football games at once, but as far as enjoying a movie, your regular HDTV will do just fine.