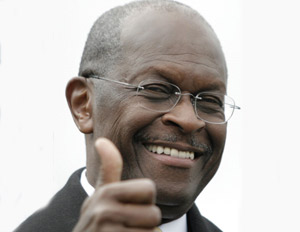 Former Republican presidential candidate Herman Cain appeared on Fox News Thursday and said he would consider taking legal action against the women who accused him of sexual harassment. He continues to vehemently deny all such claims.

“Without compromising anything my attorney and I are working on, we are not done proving or demonstrating — there will be more,” said Cain.

As for Cain’s decision to “suspendâ€ his campaign, the former Godfather’s Pizza CEO made it clear what he really meant. “It means end, there are no plans to re-emerge.”

“I am now going to change Washington, D.C. from the outside, with the backing of the American people.”

The project is still untitled and in development with HBO films, according to The Washington Post.

With Murphy as the star, Spike Lee as director, and John Ridley as writer, all three men are expected to executive produce the film.

Two months after the release of the iPhone 4S, social media analytics firm Crimson Hexagon conducted analysis on Twitter to find out how users felt about the newest iPhone installment.

The results were not as positive as Apple would think.

Some 37% of the tweets were generally favorable, 29% were negative, and 34% were neutral.

Siri dominated the conversation. And overall, tweets about Siri were more negative (12%) than positive (11%). Neutral tweets detailed questions that had been asked of the 4S-based voice assistant, and the difficulty she often has in understanding users with accents.

See the data at Mashable…