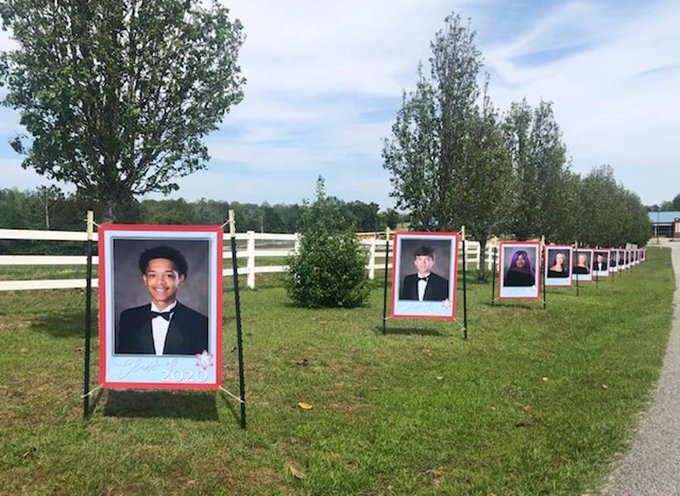 To acknowledge high school seniors who lost the end of their senior year due to the coronavirus pandemic, a principal decorated the driveway of their high school with oversized portraits of the graduating class.

According to Yahoo Finance, Farcia West, the principal of Poplar Springs High School in Graceville, Florida, wanted to acknowledge the students achievement.

“We have people living nearby whose children and grandchildren attended the school,” West told Yahoo. “It was important for me to do something for those unfinished chapters.”

Like many schools across the country and abroad, Poplar Springs moved to remote learning and closed its doors due to the coronavirus. West wanted to do something for the students and struggled with ideas for weeks. Then one day West came up with a plan “as clear as day.”

West blew up the senior photos of the school’s 30 graduating seniors and lined them up along the campus driveway. West received help from photographer Josh Mattox who is also a school parent. The student portraits were blown up into posters and mounted on fence posts.

The effort took two days to complete as West, her husband and their son secured each portrait to a post using zip ties,  and making precise measurements between each photo.

“I stepped back and said, ‘We’re in the middle of something special,’” says West.

After announcing the effort on Facebook, cars in the neighborhood lined up to take a look at the photos.

“Sometimes we had 8 cars at once,” West said. “People came from all over to see it, even those without children.”

“An act of kindness has turned into this worldwide loop,” West said.

Others have also tried to help students cope with losing proms, senior trips, and the last days of school before stepping into adulthood.

DJ D-Nice is hosting a virtual prom May 7 at 8 P.M. EST on the social network platform, Houseparty. Last month a high school student asked former President Barack Obama on Twitter to give a national commencement speech to seniors in high school and college.

Although the former president has not given an answer, a spokeswoman for Obama told CNN that they were aware of the tweets and “very flattered” but declined to comment further. Today, Yahoo announced a “Dear Class of 2020,” virtual commencement celebration, for June 6 featuring inspirational leaders, celebrities, and creators to celebrate graduates, their families, and their communities. The event will feature commencement speeches from former President Obama, Lady Gaga, Condoleezza Rice, and Malala Yousafzai.