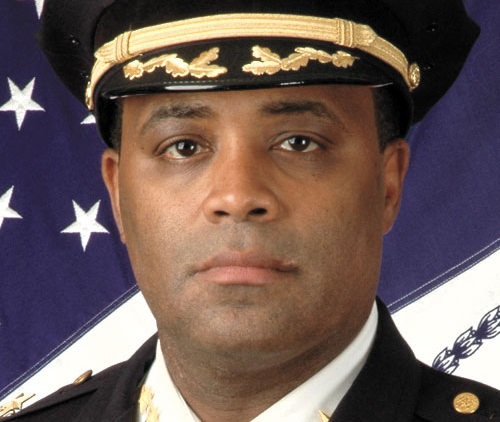 Rather than accepting a promotion to become the second in command at the nation’s largest police department, NYPD Chief of Department Phillip Banks III opted instead to hit the road.

It had initially been announced that the 51-year-old Banks a 28-year veteran on the force was being promoted to First Deputy Commissioner but in a stunning turn of events Banks passed on the position opting instead to end career as a New York Police Officer.

Banks says he decided to step down because of professional reasons, but sources say he fell out with Police Commissioner Bill Bratton over additional powers that he felt should have been granted to the position.

Banks put a statement regarding his resignation, saying in part, “I believe it is the right—frankly, the responsibility— of the Commissioner to select whomever he wants to help lead the department and assign responsibilities as he sees fit. In this case, while serving as First Deputy Commissioner would have been an honor, I felt that the position would take me away from where I could make the greatest contribution: the police work and operations that I love so much.”

He also implies he and Bratton couldn’t get over their differences, saying “While Commissioner Bratton and I both made good-faith efforts to bridge that gap, we were not successful. For that reason, I informed the Commissioner that I could not serve in that role, and he graciously accepted my decision.

According to CBS, “Banks had been seeking — and was originally promised—more power for the First Deputy Commissioner post. In the past, the position has been largely ceremonial.”

They report “Banks was promised oversight over NYPD operations, but quit when Bratton had a change of heart.”

New York City Mayor Bill de Blasio said he was disappointed to hear of Banks’ decision to step down. Putting out a statement which reads in part, “He has served New York City admirably during his nearly 30 years on the force, and we were enthusiastic about the leadership and energy he would have brought to the position of First Deputy Commissioner.”

Banks is the second African-American to hold the top uniform position. He hasÂ been with the department since 1986. He was previously the head of community affairs.

Banks’ resignation comes at one of the lowest points in NYPD-African American relations. It also comes at a time when many blacks across the country consider local police more a threat than an ally. In another incident just months ago, Eric Garner died after he was put in a choke hold by police, reviving friction that marked relations with black and Latino communities under former Commissioner Ray Kelly.

Several lawmakers and activists are calling forÂ diversity in leadership positions within the NYPD.

Reverend Al Sharpton has also called for Banks to be replaced with someone sensitive to police and community relations during a National Action Network rally Saturday morning.

It’s unclear who is being considered to take the role.