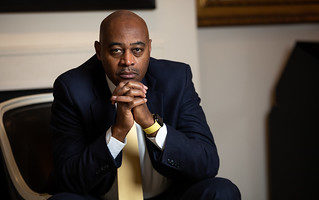 Ray McGuire wants to be New York City's next mayor. He says he wants to build a better, fairer New York. Image courtesy of Ray McGuire for Mayor. Photo by Cedric Wooten Photography

The group cited McGuire’s leadership experience, which the group believes is absolutely necessary to jump-start the city’s economy coming out of the coronavirus pandemic. It’s also the first time anyone in this group has endorsed a candidate in a mayoral race.

Carter, Combs, and businessman Steve Stoute joined McGuire in a conversation moderated by NYC radio DJ Angie Martinez on what NYC means to them and what kind of leader is needed for NYC’s comeback, and why McGuire is that leader.

“People come from all over the world and say ‘If I can make it here, I can make it anywhere’ that’s the idea we’re trying to protect,” Jay-Z said.

“I am honored to have the support of these legends. Today represents the intersection of politics and hip-hop. This is not new, but it’s important that we are all at the table when decisions are being made about the future of our city,” Ray McGuire said in a release. “We know now more than ever that our social and political identities are inextricably connected. There’s no social justice without economic justice. We know New York is broke and broken, but we are not without hope. The McGuire Comeback Plan will kickstart the most inclusive economic recovery in New York City history. We all share a deep love for this city and I look forward to having them on Team Ray for the remainder of this campaign.”

In February, a group of former and current athletes also endorsed McGuire for mayor.

The New York City mayor’s race is flooded with more than a dozen candidates and is one of the most anticipated elections of the year.