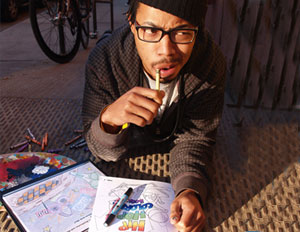 James Shields mapping out his dreams in color

In 2008, Howard graduate James Shields found himself sitting at a cubical punching numbers into Excel. At 23-years-old he was gainfully employed as an assistant buyer for Macy’s in New York City. Given media outlets continually reporting on the growing unemployment rate among millennials entering the real world, he was happy to have a job but he wasn’t inspired. The “repetitive atmosphereâ€ pushed a bored Shields to begin doodling on his work papers.

“I started carrying a separate folder to keep track of my designs,” he recalls. “The appreciation of being creative wasn’t shared… It was such an extreme that it directed me to do what I enjoyed. I realized that my talents laid elsewhere.â€

His boss agreed and Shields was laid off within 10 months. Finally free to explore his dreams, he says, “That was the greatest thing ever.â€ The first year he collected unemployment, but within the next two years Shields was able to live completely off his art, which consisted mostly of graffiti-inspired outlines and depictions of iconic figures, such as, Martin Luther King, Jr. and Malcolm X. Learning the business “by trial and error,â€ he sought out mentors who shared their knowledge and pushed Shields to tap into his latent talents. “I was never a professional artist,â€ he admits, “but God gave me the buffer to learn how to sell my art.â€

Social media played a part, too, for the now 26-year-old to grow his list of supporters. As his clientele grew so did his mediums for creative expression. Shields made a name for himself plastering images on numerous client’s skateboards, among other canvases. It wasn’t long before Shields switched gears from painting to pursue his true childhood dream. “I always wanted to create a coloring book because I think traditional coloring books stop people’s creativity,â€ he says. “They make kids feel like they have to draw within the lines.â€

So on December 10th, the self-described “hip-hop enthusiast” presented, The Hip-Hop Coloring Book ($15), which is the first of a five volume series, at the Charles Bank gallery in New York City. “It was my first big opening,â€ he says proudly of the event, which pulled in over 200 attendees.

In the soft cover, Shields introduces young readers to legendary hip-hop acts like Afrika Bambaataa, the founder of the Zulu Nation; Kurtis Blow, who released the first platinum selling record; and Fab 5 Freddy, co-creator of the first hip-hop movie Wild Style. Through his work he also exposes children to historical NYC neighborhoods related to the culture’s evolution. The information is incorporated in fun ways like playing connect-the-dots to discover hip-hop facts or doing a rap word search. Kids are even challenged to test their language skills when assigned the task of penning an acceptance speech. “The reward doesn’t come with who colors inside the lines the best,” says Shields. “The reward is by completing the artwork. It’s a self-rewarding activity that comes with participation.â€