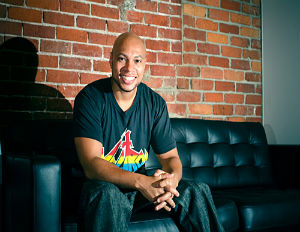 Michigan native and current St. Louis resident Vaughan Taylor is bringing something brand new to hip hop with Air Playd. Instead of creating a traditional video for a new song, the web-based venture (which is moving to mobile very soon) creates custom video games for songs. Players have the opportunity to not only listen to, but download new and exclusive music from their favorite artists all while playing the game.

BlackEnteprise.com had a chat with Taylor so he could tell us about his life as a dad, husband and of course the ins and outs of being an entrepreneur in hip hop’s digitalscape.

Tell me about Air Playd. What is it and when did you start it?

I came up with it last April. In the beginning of 2012, I started teaching myself how to code. I had ideas, but it’s hard to manifest ideas if you can’t code yourself. I’m definitely going to teach my daughter how to code.

Time out. I just have to acknowledge the adorableness of you saying you’re going to teach your daughter how to code. You didn’t say ride a bike or drive, but code. Too cute.

*Laughs* Yes, It’s an important skill to have right now, so I think it’s something that would just help her have more options in general by the time she’s old enough to do it.

Love. Ok, back to Air Playd…

So basically, we make custom video games for songs. The artist essentially creates a soundscape. If the song is about Detroit for example, the game might feature Detroit landmarks and streets.Â  You start with the music and let your brain go.Â  But we go beyond that.

How is Air Playd different than other games out there?

When you look at mobile games that are out and poppin’ right now, they lack a certain edge or cool, but people eat them up. So my thought process was how do I add something new, but also something of value? Wouldn’t it be cool if you could play a game and win music from your favorite artist? So that’s what we did. With mobile apps now you pay a dollar and you win a virtual pig or something useless like that. Who wants a virtual pig? Much better to get something of value like music downloads.

So what exactly is your role in Air Playd and what’s your typical day like?

I do the coding and I have two people who do design. First thing is being a dad full-time during the day while my wife is at work. She’s a professor. So from 10 am to about 6 pm I’m watching the baby. She’s five months old. Then from 6 pm until like 2 am, I’m working on Air Playd.

Was it scary at first being at home alone with the baby?

No, it’s not scary at all. Coming from the music industry and having to depend on yourself to do things, I just jumped right into this and embraced it. I’m used to drastic changes. Plus, I love spending time with her.

Speaking of being a baby, you started out as a rapper in the group “Athletic Mic League” when you were still a teenager. How has your relationship with hip hop changed over the years?

When I was about 19/20 years old, I thought I was going to make all of my money by being a performing artist. But it stopped being fun to me. All the regular things that happen in the music industry with issues with the label, not getting paid and things like that. Plus, you have the whole basic change in music where people consume more music, but they don’t necessarily buy it. It was less enjoyable when I was depending on performance money for my income. As I got older I was thinking about how I could still leverage music but separate myself from all of those things. I don’t depend on my music anymore in that way to make me happy.