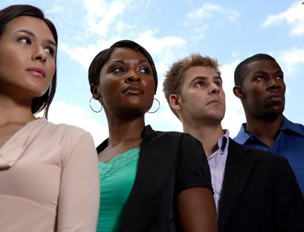 Blendoor is a mobile app that matches tech companies with qualified women, veterans and minorities for hiring. Jopwell is a cloud service that connects individuals from underrepresented groups to companies looking to diversify staff.

Some technology is designed to eliminate biases in hiring by making the interview process almost completely anonymous. Hiring bias has been a frequently scrutinized subject. The National Bureau of Economic Research in its 2003 study, “Are Emily and Greg More Employable than Lakisha and Jamal? A Field Experiment on Labor Market Discrimination“ found that those with traditionally African American names, received 50% fewer callbacks for interviews than those with more standard, white names.

Interviewing.ioÂ is a site that allows engineers looking for tech jobs to practice technical interviews (with interviewers actually in the tech industry), anonymously. Interviews have voice, but no video or images of interviewees and the interviewer will not have access to any information of those being interviewed.

If an interview goes well, the interviewed candidate can reveal his or herself. People have been hired using Interviewer.io and the service is said to help mitigate bias in interviews where technical skills are most critical in getting hired.

There are also apps for in-house staff training. diversityDNA is a mobile app that provides “mini diversity training,” according to the app’s description in iTunes. The app strives to give users cultural competency for better interaction in the workplace with those of different backgrounds and experiences.