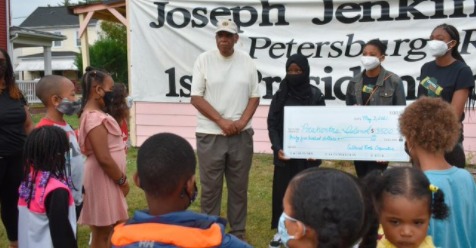 Students from an education cooperative called Cultural Roots has provided a gift of $3,500 to Richard Stewart for the Pocahontas Island Black History Museum, located in Petersburg, VA.

Stewart’s house doubles as a Black History Museum. He chronicles the island’s history there as the “oldest Black community in the United States.”

“About 700 historical pieces are packed within the house’s walls,” the Progresss-Index of Petersburg, VA reported. “Stewart has been used to seeing visitors come to his museum from across the country.”

“We first met Mr. Stewart in early 2019 when he gave our co-op a hands-on tour of this amazing museum which is home to hundreds of primary source documents and artifacts regarding Black history,” the Website reported.

Cultural Roots is a BIPOC culturally rooted homeschool cooperative where the African Diaspora is emphasized in its studies.

The students who created the short film asked viewers to preserve Pocahontas Island, in addition to documents and artifacts Stewart collected over the years by fundraising as a part of the project. According the co-op’s website, the initial fundraising goal was $3,000.

The Progress-Index also reported that the kids presented a $3,500 check to Stewart, which he said was his museum’s largest gift. Additionally, the story credited an unnamed instructor from Virginia Commonwealth University for helping the students to create the documentary.

Kennedy Wright, a sixth grader who worked on the film, remarked that the museum’s iron slave shackles was her most prominent memory from visiting the museum.

“I’d never seen slave shackles before and I thought it was really cool,” Kennedy told The Progress-Index. “If this museum goes away, I’m not sure we’ll get to see those kinds of artifacts.”

Stewart, a Black History and Civil War expert, is the museum’s founder, an orator and the unofficial “Mayor” of Pocahontas Island who can trace his ancestry back to the 1700s on the island.