Hooray For Nollywood: Behind The Scenes Of The Nigerian Film Industry 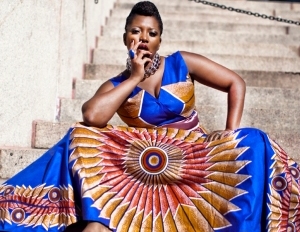 On the other side, however, the logistical obstacles—even on basic things like sound and light—are many.

“In the United States, the lights run 24 hours a day,â€ Bassey explains. “There are no power issues. [In Nigeria], you can be shooting and the lights will go off and suddenly you’re dealing with a blackout. That blackout could last for two weeks, or a month. Now you have to go get a generator, which is not cheap, and then deal with the noise of a generator, which can ruin your sound quality.â€

“Plus, if you’re shooting in NY or L.A. you can snap your fingers and get equipment,â€ she continues. “You have access to state-of-the-art cameras and trailers and a solid film crew—talented people who are always look for work. Although [Nollywood] is a big industry, it’s not easy to find everything you need when you need it. The talent pool (cameramen, grips, sound personnel) is limited, so often the quality of the film suffers.â€

And many local Nigerian actors find that the pay—if they’re not unionized—is minimal. “Back home, people are enamored by the industry, so you can get people to star in your films for relatively nothing,’ she says. “There’s no pay for overtime hours worked and there are often no food carts on set,â€ Bassey says. “You often do your own stunts and there is no insurance plan in case you get hurt.â€

Even with all its challenges, actress and Miss Black USA 2010Â Osas Ighodaro—who appeared in the 2008 filmÂ Cadillac Records, starring Jeffrey Wright—is rooting for Nollywood. “We’re not just telling ‘traditional’ Nollywood [stories],â€ says Ighodaro, who recently filmed Delta Fires, a documentary shot alongside the soon-to-be- released film,Black November featuringÂ Kim Basinger andÂ Mickey Rourke, andÂ Vivica A. Fox. The documentary focuses on devastating series of oil spills in Nigeria. “We’re telling stories that have purpose. We’re educating people about what’s happening in our homeland; what we’re dealing with here. The oil spills [across Nigeria] have been much more damaging than the 2010 [BP oil spill in the Gulf of MexÃ­co], yet no one’s talking about them.â€Â Black November is scheduled for release in the coming months.

Oji Idakwoji, film producer and co-founder of a New York-based networking organization called Nollywood NYC, says he’s confident that as the industry gets a better handle on piracy, which runs rampant, and takes more of a cinematic route than its current straight-to-DVD model, it will grow even bigger. “We’re looking to attract a different class of investors and stakeholders in order to achieve this,â€ says Idakwoji. “We are positioning ourselves to bring even more of our stories to the entire world.â€