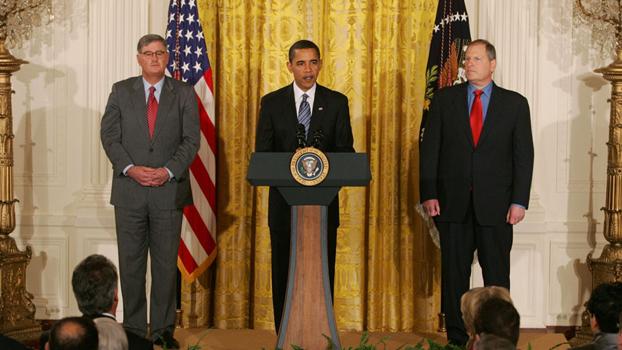 President Barack Obama speaks on the economy Wednesday while flanked by Sam Palmisano, CEO and president of IBM (L) and David M. Cote, chairman and CEO of Honeywell. The House later approved the president’s economic plan. (Source: The White House)

President Barack Obama is one step closer to putting in place his plan to stimulate the economy. His administration’s American Recovery and Reinvestment Act passed in the Democrat-controlled House tonight by a vote of 244-188.

“Last year, America lost 2.6 million jobs. On Monday alone, we learned that some of our biggest employers plan to cut another 55,000,â€ the president said in a statement, citing the “Monday Massacreâ€ in which several of the world’s largest corporations pink-slipped legions of workers. “This is a wake-up call to Washington that the American people need us to act and act immediately.â€

But the Obama administration did not receive the victory it had sought: a bipartisan vote on its $800 billion—plus stimulus package that would, among other things, spur the creation of more than three million jobs, provide billions of dollars of aid to states, and offer a series of tax breaks. The bill was supposed to be legislation that would help usher in a new day in Washington, one marked by the spirit of unity necessary to propel the nation forward. But not a single House Republican supported the measure. Before voting on the legislation, House Minority Leader John Boehner urged fellow GOP members to resist the act because it “has too much wasteful spendingâ€ — such as dollars targeted for family-planning initiatives and funding for the arts.

Charges leveled by conservatives included that congressional Democrats “loaded the package with porkâ€ and that Obama “overstated the severity of the economy.â€

The lack of support came after Obama spent much of this week pushing for bipartisan backing of the package. In a rare outreach effort for a sitting president, Obama took his case to Capitol Hill on Tuesday to sway both House and Senate Republicans. And today he met with business leaders in what he called “a sober meetingâ€ and stressed that “part of what led our economy to this perilous moment was a sense of irresponsibility that prevailed from Wall Street to Washington.â€

Moreover, he promised that his “administration will administer this recovery plan with a level of transparency and accountability never before seen in Washingtonâ€ through the Website, Recovery.com, which will allow taxpayers to follow how each dollar is being spent. In describing this move to transparency, Obama quoted the late Supreme Court Justice Louis D. Brandeis: “Sunlight is the best disinfectant.â€

It is anticipated that the package will put large numbers of people to work, in part, through infrastructure repair assignments and construction work tied to upgrading schools and other public buildings. And New York Congresswoman Nydia Velazquez, chair of the House Small Business Committee, hailed the measure because it is expected to