How 5 Celebrities Pay it Forward with Education Programs 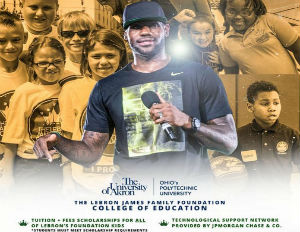 Beyond walking the red carpet, performing center stage at awards shows, or jet-setting around the world, several celebrities are committed to leaving the world in a much better place than they found it–especially when it comes to education. Check out how a few celebrities are making headlines by paying it forward.

Lebron James
Recently, LeBron James announced his foundation, the “LeBron James Family Foundation,â€ has partnered with the University of Akron to sponsor more than 1,000 scholarships for children who complete his I Promise program based in Akron, Ohio.

In 2003, former NBA Star and mayor of Sacramento, California, Kevin Johnson, founded St. HOPE Public Schools, a charter-school network. According to the organization’s website, it has dramatically improved Oak Park through its holistic community development approach, creating 20 businesses, and over 300 jobs. It also opened 40 Acres Art and Cultural Center, a 25,000-square-foot mixed-use facility located in the heart of Oak Park. Housing a cafe, bookstore, barbershop, art gallery, and 200-seat theater, the complex won distinction from the California Redevelopment Agency with the “Award of Excellence in Mixed-Use Developmentâ€ in 2004.

Tyrese posted this response to his Instagram: Â “He’s 21, his mind is SHARP, he’s dedicated his life to Christ he’s a virgin and has not allowed the pressures of society to take him under!!!!! Wow!!! I’m about to murder these classes……???? Wow wow wow – I’m fired up for you bro….. It GO season!!!! #MoreHouseCollege#StraightOuttaCompton lets GO!!!!! @ZoTheMotivatorâ€

“Zo the Motivatorâ€ posted this message on his Instagram, “As of today I begin my journey as a Man of Morehouse. I am beyond grateful and thankful to be apart of such great legacy. None of this would be possible without God, @tyrese, the support from my family and of course, my relentless hard work. Annually, Morehouse is around 45k-50k and as you can imagine, that is a lot of money. I thank God for placing @tyrese in my life. It is because of him believing in me and investing in my future, that I am able to receive my education. I am amongst the world’s greatest leaders and I want to thank @tyrese for giving me the opportunity to pursue my academic and career endeavors at Morehouse College. #zothemotivator #comptontomorehouseâ€

In 2009, Black Eyed Peas member, and Grammy Award winner Will. I. Am, sponsored four teens, Â Elijah,Â Jaiquann,Â Darien, and Barien to four-year accredited schools through his i.am Scholarship foundation which covered room & board, tuition, and books. In a statement released to Oprah.com, Will.I.AM said,Â “He feels it’s his duty to help inspire the future of our country. ‘You can get your money and you put it in the bank, or you can put it in the youth. You can put it in our future,’ he said. ‘I’ve traveled the world because someone believed in me, and it makes me feel like you can have dreams, especially in this crisis, right? That doesn’t mean we stop dreaming.'”