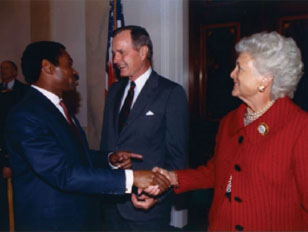 By the time the deal closed, TLC had sold assets for roughly $430 million, cutting almost half of its debt. The ownership of the new company, now called TLC Beatrice International, was distributed 55% for TLC, 35% for Drexel and its partners, and 10% for management. Lewis was now leading a company that generated nearly $2 billion in revenues a year, making it the 1988 be 100s Company of the Year.

The Transition
Lewis was aware of the deal’s significance but, as always, focused on business. To run his international conglomerate, he was now spending as much time in Paris as in New York. In addition to meeting with managers, he walked through factories, learning about his business as he asked questions of workers. By 1990, TLC Beatrice’s operating income had grown to more than $94 million, a 56% spike from his first year leading the business.

In addition to maximizing profitability, he sought more deals. Those ambitions were stifled when efforts to take TLC Beatrice public, which would have enabled it to use both cash and stock in transactions, proved unsuccessful. Additionally, a bid to acquire Beatrice’s domestic operations was not accepted. Despite these setbacks, as his motto dictated, Lewis kept going, no matter what.

Everything changed in the winter of 1992 when Lewis was told he had a brain tumor. Shortly thereafter, the 50-year-old trailblazer died, on Jan. 19, 1993.

His brother, Jean Fugett, was named his successor. An attorney and former pro football player, he had been involved in many of Lewis’s dealings. Nonetheless, taking over was a huge challenge.

In addition to the difficulty Fugett faced sustaining what Lewis had built “without the architect,â€ he also dealt with a deep recession throughout Europe that caused TLC Beatrice’s operations to suffer. After roughly a year, Loida assumed her husband’s old position as CEO. “I’ll always be grateful to Jean because he held it together,â€ she says. “However, I decided to take over because if it ended up a mess, I wanted it to be on me.â€