The story of Baseball Hall of Famer Jackie Robinson, the legendary “42â€ of the Brooklyn Dodgers, is one of the great American narratives of the 20th century.

The first African American to break the color line in Major League Baseball in 1947, Robinson had a storied career in the game–playing in six World Series, helping clinch the championship for the Dodgers in 1955, and receiving the first Rookie of the Year award and an MVP. Impressive, but achievements won on the field only scratch the surface of his impact. Robinson’s breakthrough was a cultural earthquake. His talent, courage, and unassailable professionalism helped shatter the racist stereotypes well beyond the world of baseball, ushering in a new era of opportunity for African Americans in all fields. 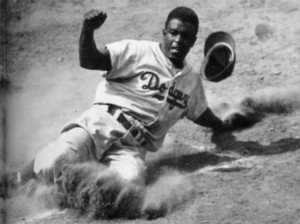 Jackie Robinson–along with visionary manager Branch Rickey, who engineered his entrÃ©e into the majors–changed the game and made history. Their remarkable partnership is the subject of 42–a major motion picture from Warner Bros. staring newcomer Chadwick Boseman as Robinson and screen veteran Harrison Ford as Rickey. Set for release in Spring 2013, the film is also the inspiration for an ambitious multimedia campaign by Walmart.

The retail giant is highlighting its lauded supplier diversity efforts by paying tribute not only to Robinson but to everyday African American history makers who are the inheritors of his legacy.

“The purpose of Walmart’s partnership with the film 42 is to focus on saluting African Americans who overcome barriers, then and now,â€ said the retailer’s Director of Marketing, Sharonda L. Britton, taking a quick break from a full day of video shoots of Walmart supplier partners sharing their stories. The taped interviews will figure into a full-court media effort that rolls out during Black History Month in February and on to the film’s nationwide release in April.

“Walmart,â€ she continued, “plans on sharing the Jackie Robinson story, along with others who have faced challenges to find success, as a means of reaching out to and inspiring future generations of achievers.â€

The promising buzz surrounding the upcoming film provides Walmart with an opening to place a bright spotlight on its work to broaden the diversity of its supplier network and provide suppliers with the tools needed to partner with the company successfully. The effort is significant because the potential impact–for small and minority firms with the products and skill sets that Walmart is looking for–is deep and far reaching.

The consumer reach of the company is massive, serving customers and members more than 200 million times per week through its Walmart and Sam’s Club retail outlets, online, and on mobile devices. Walmart operates in 27 countries and posted sales of approximately $444 billion in fiscal year 2012.

Those numbers represent a lot of shelves to fill and a lot of markets to serve. Walmart’s decision to prioritize diversity as a corporate strategy (black enterprise named the company one of the 40 Best for Diversity in 2012) stem’s from recognizing the importance of identifying signs of shifting tastes and emerging trends to keep its stores competitive. Strong supplier relationships are essential. Walmart is investing accordingly, spending $11 billion with minority and women-owned suppliers to date.

To further expand this thrust, Walmart last year teamed up with Black Enterprise to develop a series of 20/20 Vision Forums on supplier diversity to help entrepreneurs scale up their operations to land and service sizable contracts. This year, Walmart and be are co-promoting the “Get On The Shelfâ€ initiative. This program is being re-designed to help suppliers sell retail products at neighborhood markets, Sam’s Club outlets, and big-box stores while bringing women-owned enterprises and minority-owned professional services firms into the fold.