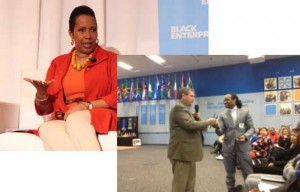 Richelieu Dennis, CEO and founder of Sundial Brands, a manufacturer and distributor of organic skin and hair care products, has proven successful by following these guidelines.

“The core was that we had a great product from an integrity standpoint,â€ he says. “We were able to offer a cultural perspective and plug into a big business and still customize [our approach for] small customers.â€

Sundial, named be’s 2008 Emerging Company of the Year, spent months working with the retailer to seamlessly integrate its brands into the Walmart structure. Another entrepreneur to benefit has been Amy Hilliard, CEO of The Comfort Cake Company. Hilliard set out to put her Southern-style baked goods (“the pound cake that feels like a hugâ€) on the shelves of major nationwide retailers right out the gate when she founded the venture in 2001. Herself, a veteran of high-scale corporate marketing (see profile), she invested strongly in product development and pro-level packaging that consumers associate with big brand products. She also made sure she could produce to scale of a major buyer.

“I knew I wanted to be in the wholesale business, not have a small bakery.Â  In order to do that, I needed to sell to capacity from the beginning,â€ she said.

Hilliard sold her home to finance the launching of Comfort Cake, but the investment paid off. By 2007 her buttery cake slices were occupying primeÂ  space on Walmart shelves. Hilliard came to entrepreneurship having already earned her stripes as a corporate marketing professional. Most small business owners don’t have that kind of edge or the perspective that comes with it. The traditional barriers that small and new business owners face–limited experience, lack of capital, little viable or supportive business infrastructure, especially in rural areas, and competitors with deeper pockets and established relationships–can inhibit growth of your bottom line. At their most oppressive, these obstacles can do something far worse; they inhibit vision.

For the past two years, Walmart has focused increased attention to the Deep South, the so-called “Black Belt,â€ where small farmers have traditionally struggled to upscale their operations beyond serving local grocers and farmers market.Â  Walmart is helping awaken small growers to their potential to be major league produce suppliers.

“The missing link in the region had been a big company that could bring dollars, technology, and a contemporary business perspective to agricultural development efforts,â€ according to Ronald McCormick, Walmart’s senior director for sustainable agriculture.

He added that the prospect of a large partner such as Walmart would give area farmers an incentive to grow, to expand their vision of what they can achieve. Working in collaboration with Tuskegee University and other local historically black land grant institutions,Â  the company is conducting pilot programs in five states (Alabama, Arkansas, Mississippi, Texas, and Georgia).

“The ability to see the scope of possibilities is one way to overcome a particularly sensitive hurdle: small businesses and big buyers speak a different language,â€ said McCormack. “In one instance we had a need for watermelon, so we ordered 17 truckloads from a group of local farmers. For them, a truckload meant a pickup truck’s worth of melons, so that’s what they grew. Then on the day of delivery, these massive semi trucksÂ Â  drive up. You can see the problem.â€

Mishaps like these are also learning opportunities, says McCormick, noting that this coming season Walmart is expecting to buy an estimated 200 “semi-sizedâ€ loads of watermelon from those farmers.

Much of what McCormick advises local farmers is applicable to the myriad small businesses nationally looking to “Get on the Shelfâ€ at Walmart. He says suppliers should tailor products to the buyer’s needs as well as develop partnerships with other small ventures asÂ  way of achieving scale quickly and affordably.

“We know that there is still much more work to do, and many more suppliers we can help develop and prepare to do business with Walmart,â€ says Britton. “We’re proud to partner with African American suppliers in breaking barriers to opportunity. Step by step, Walmart’s Supplier Diversity team is changing the landscape for small business. In their own way, they are making history.â€