How to Find a Manufacturer for Your Invention 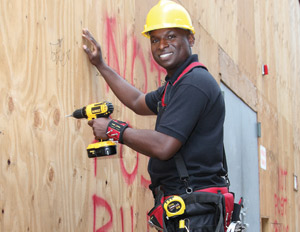 Editor’s Note: Andre Woolery is the creator of the MagnoGrip Magnetic Wristband. The wristband, which is embedded with magnets, keeps drill bits and small tools handy. Here, Woolery takes readers through some of the challenges he faced finding a manufacturer for his invention.

So you have a product idea and you’ve done enough market research to determine that this will be the best thing since sliced bread. Now you’re trying to figure out how to get the product made but you’re not sure where to start. Below are a few tips based on my personal experience with finding a manufacturer for my MagnoGrip Magnetic Wristband, which is now distributed at Home Depot, Lowe’s, and Ace Hardware stores across the country.

Leveraging your prototype
Initially, when I worked on the prototypes for the MagnoGrip Magnetic Wristband, I looked at products from surfboard leashes to cell phone holders for design ideas. Since I didn’t know how to sew, I reached out to a woman in my neighborhood who helped me put together the first prototype. Â Though these early models were rough examples, people were able to get a visual understanding of my concept.

In order to convince a manufacturer, you’ll need a prototype to sell them on why the idea will be successful.Â  A prototype communicates to the world that you’re serious and willing to take risks and action to get your venture off the ground.Â  It’s important to note that if a manufacturer signs on to develop your product, they are doing so at the expense of taking on someone else’s project.Â  The last thing they want is to waste time because it will be more work than reward for them.

Generating leads — Assessing your network
When I was trying to find a manufacturer, I reached out to everyone andÂ  anyone who I thought would be able to help connect me with the right people.Â  I talked to the store managers of my local hardware stores.Â  They, in turn, introduced me to local distributors, who in turn introduced me to other manufacturers.Â  I also talked to friends of friends who had prior experience in manufacturing and the import/export business.

What are some challenges you’ve faced in bringing your invention to market? What has been the most difficult part of generating leads?
When I initially began looking for manufacturing leads, the first place I looked was to family and friends. If done effectively, you’d be surprised at how quickly you can generate a list of potential manufacturers from this very simple step.Â  The key to getting the most out of your personal network is to make a thorough list of people to reach out to, including people that you don’t know well.Â  Be willing to put yourself out on a limb by asking someone for help and, most importantly, following up on the leads that your family and friends do generate for you.

Next week, Woolery tackles tradeshows and industry events. And for more about Andre and his invention, as well as taking your own idea from concept to creation, pick up the November 2010 issue of Black Enterprise and read the cover story Code Name: Inventors. And be sure to check out this quick tips video.
Related links:

From Invention to Market: Starting the Journey

Inventors Insider: 4 Rules for Inventing With a Partner

Inventors Insider: To Patent or Not to Patent, Part 1

Inventors Insider: How to Create an App for That

Inventors Insider: 7 Things to Do Before Filing a Patent