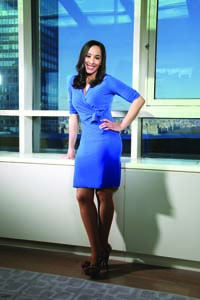 At 24, Jhanay Harris is a poster child for getting off to a good start. On her laptop she has an Excel spreadsheet of her budget, where she dutifully tracks her rent, groceries, and other expenses. She has $100 automatically taken from each paycheck and funneled into savings. She has no credit card debt. And because she had a full athletic scholarship to play basketball at Central Connecticut State University, she has no student loan debt.

“My parents were both teachers. They always taught me to save and the value of the dollar,â€ says Harris, who lives in Wallington, New Jersey. “I’ve heard the horror stories. It’s hard to get out of debt when the interest piles up,â€ Harris says. “My mom sat me down and talked to me about these kinds of [things]. You have to be smart and be conscious of how debt hinders you in the future.â€ She’s not trying to go down that road. Her credit score is just more than 700. Harris is so squeamish about debt that she wants to pay off the five-year loan for the 2007 Honda Accord she purchased in 2010 early.

Harris, who earned a Bachelor of Science in marketing in 2009, joined the New Jersey Nets right after graduation, working part time in their inside sales department. In June 2010 she was promoted to the full-time position of group sales assistant and about a year later, promoted again to a marketing assistant. She currently makes $32,000. She has more than $3,500 combined in her checking and savings. Though after her expenses she has around $350 left over from each paycheck, she hasn’t gone to the next step–investing. “I’m not sure how much I can contribute if I were to start saving in my company’s 401(k). If I put money in the 401(k) it will mean I have less to put in my savings and I don’t want that account to go too low. You can’t easily pull out money from a 401(k) if you have an emergency.â€

She’s interested, but hesitant. Harris would also like to invest outside of a 401(k). However, she says she doesn’t have much appetite for risk, especially after having watched the stock market the last couple of years. “I want something relatively safe,â€ she says.