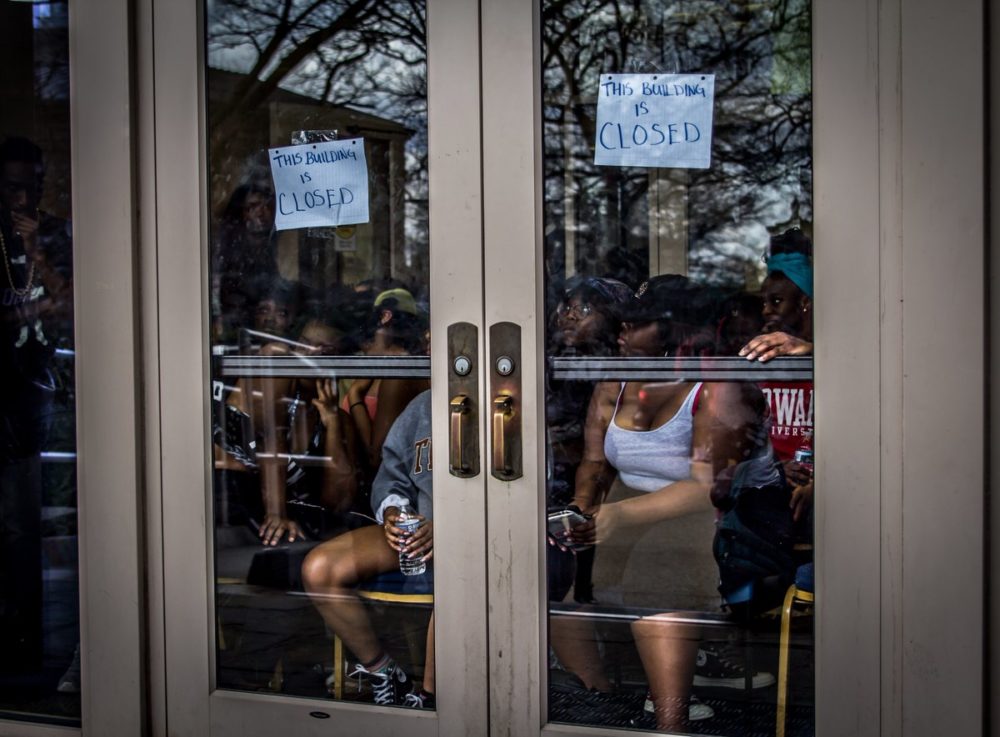 Students at Howard University have occupied the administrative building to demand change in leadership and policies, amid an ongoing financial aid scandal. (Photo: twitter.com/garrett24fps)

Now in its sixth day, hundreds of Howard University students are still occupying several buildings on campus, including the main administrative building to protest and demand change in the financial aid scandal that has seen six college employees fired.

The sit-ins, organized by Howard University Resist, began last Thursday after president Wayne A.I. Frederick admitted in a statement that “there may have been some misappropriation of university-provided financial aid funds” by some university employees.

In a news release, Howard University Resist described talks with board of trustees members Sunday evening with one negotiation session stretching into Monday. The protesters said they’ve held three sessions with the board of trustees with a fourth scheduled for Tuesday.

“We are prepared to occupy the administration building until we are more than satisfied that our demands have been met,” the release said.

Frederick said he informed the university’s Board of Trustees, which in turn hired RSM, an outside auditor to conduct an internal investigation.

For nine years, between 2007 and 2016, grants were awarded to some of the HBCU’s employees who at the same time applied for financial aid money, exceeding the total cost of their attendance. These employees pocketed the difference, the investigation found.

“Records obtained by a Howard University financial aid administrator show that former financial aid officials received nearly $1 million in financial aid funds between 2013 and 2017 in an office-wide scandal that involved at least four other senior financial aid administrators. Accounts given by current and former employees and students familiar with the embezzlement scandal suggest that Howard University President Wayne Fredrick and his administration have been aware of this fraud since at least May 2017, despite making no public comments on the matter. Since that time, at least seven senior-level financial aid officials have either resigned or been quietly removed by the university. It is unclear whether the university has reported the theft to federal authorities or worked to recover any of the stolen money.”

Students are now demanding revisions to old policies and the enactment of new ones: the provision of adequate housing to students under the age of 21 and the extension of the fall 2018 housing deposit until May 1, an immediate end to tuition hikes, creation of active measures to combat rape culture on campus, the creation of a grievance system where administrators can be held accountable, amidst other demands.

Student organizers have also demanded access to individual voting records of the members of the board of trustees and resignation of President Frederick and the Executive Committee of the Board of Directors.

“Executive mismanagement and neglect has expedited the deterioration of our beloved university. We can no longer accept leadership that opposes the interests of its students and the black community,” Howard University Resist wrote in their list of demands.

Over the weekend, scholarship search startup Scholly announced on Twitter that it is starting a fund dedicated to help Howard University students affected by the financial aid scandal.

“As a company committed to helping students pay for college and ensuring they can achieve their dreams, the recent financial aid scandal at Howard University hits home for us. Therefore, in order to help Howard University students, we are launching a scholarship fund to award students who were adversely affected up to $10,000 in scholarships,” the company wrote on the landing page of the newly created fund.