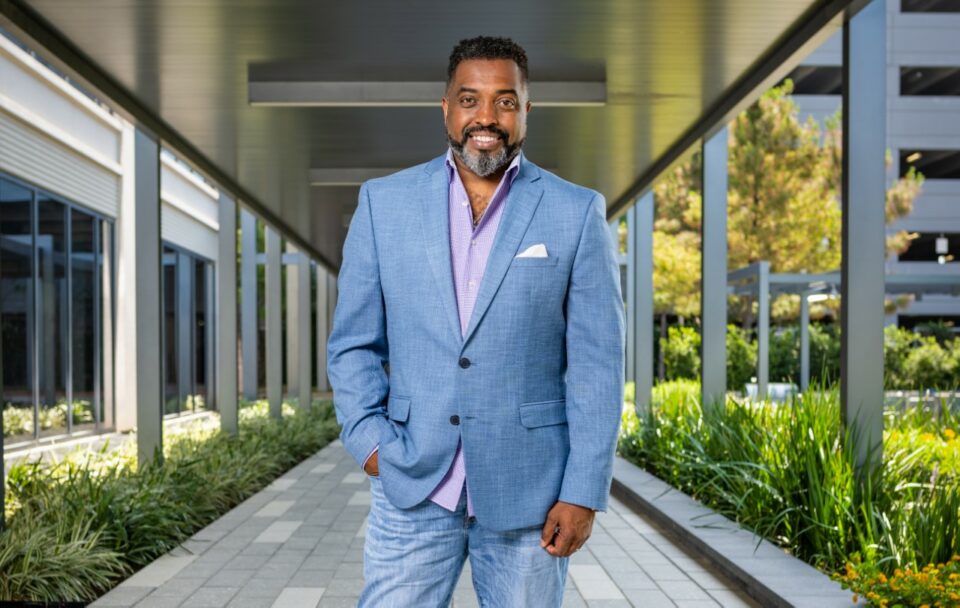 Ron Guerrier transcends his role as global chief information officer at HP, and takes pride in passing the baton to the younger generation of STEM innovators.

“I believe my job right now as a CIO is not just to deliver to the company objectives,” Guerrier proudly tells BLACK ENTERPRISE.

“It is to give a voice and give an opportunity to that next generation because they’re the ones who are going to change the world.”

With more than 25 years of experience managing technology, the Chicago-based trailblazer has been a Fortune 500 CIO for three of his five C-suite jobs. He is driven by his dignified Haitian roots and humble beginnings where he discovered the power of technology and innovation at an early age.

“In the absence of resources, you innovate,” Guerrier says. “And I say that is visiting family in Haiti or having cousins that live here in the projects of Chicago.”

“It’s amazing that when you don’t have much, you find ways to make things come together. I do remember working on my uncle’s car, and he had a Ford and we were putting Dodge parts in it and Chevy parts in it, because the lack of means, you find a way to kind of innovate.”

Growing up, Guerrier was a victim of gun violence and in foster care as a ward of the State of Illinois’ Department of Children & Family Services. These experiences galvanized a second life to champion for not only himself but for inner-city kids and beyond.

A hustler at heart, Guerrier’s ambition led him to repossessing cars in Detroit, Chicago, Milwaukee, and Minnesota and later rising up the ranks at Toyota from an entry-level customer service rep to CIO.

“The thing that really propelled me at Toyota to go from the repossessions clerk and coordinator to the CIO in the 19 years I was at Toyota was I always volunteered for things,” Guerrier says. “When someone said, ‘We’re looking for these 10 skills,’ I always said, ‘Well, I know I can do six, I’ll learn the other four on the job.'”

“I always pushed myself and placed a bet on myself. And that helped me propel throughout technology opportunities. But that was the first moment where I realized that technology is an enabler.”

At HP, Guerrier is leading with value and community action. He takes great pride in a company that had a plan to amplify its commitments about social justice and racial equality during the nationwide civil unrest following George Floyd‘s death.

“I joined HP and I proudly wear their shirt, is when I met with Enrique [Lores], the CEO, and I saw the members of the board, it’s a diverse board, I was like, this organization is not just reacting to the murder of a man in Minnesota, as many did,” Guerrier says.

“But there was actually a history of them truly reaching out to other communities and diverse communities, but more importantly, really putting their money where their mouth is.”

With Guerrier’s help, HP is also active in building a diverse Black talent ecosystem and pipelines for hiring through its HBCU Business Challenge, HBCU Tech Conference, and more.

In his previous role at Farmers Insurance Group, they gently used devices, laptops, and tablets to refurbish and donate them to Vector90, thanks to his non-profit STEM Advantage, which provides opportunities for young women in underserved communities.

Guerrier has worked with Homeboy Industries, a non-profit which provides tech training to former gang members. He led the program to teach them how to refurbish tech devices.

Before embarking on his HP journey, Guerrier worked for Governor JB Pritzker as the head of IT for the state of Illinois, a role that hit close to home. He was not only committing to digitizing the Department of Children and Family Services, but executing a broadband bill that extended throughout the state of Illinois.

Previously, Guerrier held a position as CIO at Express Scripts, the nation’s largest pharmacy benefit manager, and sponsored a company called Blacks in Technology and its BITCOIN conference.

“I was fortunate to be there and Nipsey was there, Senator Klobuchar from Minnesota was there. And it was just amazing to see, clearly my background, his background and the senator of Minnesota all in the room talking about how the importance of diversifying technology to all communities, but really, really being intentional on closing this digital divide,” Guerrier says.

Guerrier’s journey is a testament to all that he has accomplished leading up to this point in his life. For HBCU students and beyond, he strongly believes that IT training and certification pathways are essential to starting a career in tech, despite setbacks for Black at-risk youth and young adults, without a 4-year degree.

“I think there’s a fallacy that everyone has to go to a four-year college and then they get that great tech job,” Guerrier says.

“And so the beautiful thing about tech, back in the day when I was growing up in the nineties, you had to pretty much pay for every training. Nowadays, a lot of the big organizations such as Google, AWS, Microsoft, they provide free training and you just have to pay for the certification.”

For Guerrier, authenticity is key.

“See yourself as the CEO of your brand,” Guerrier advises.