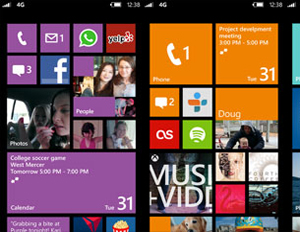 HTC and Microsoft announced on Wednesday their latest creations: the Windows Phone 8X and the 8S. At the press event in New York City, HTC CEO Peter Chou said the two tech companies aimed to open the next chapter in a longstanding partnership that’s spanned 15 years.

Microsoft CEO Steve Ballmer emphasized that same message, adding that their latest inventions will take things to the next level. “Pairing HTC’s beautiful new Windows Phone 8X and 8S with our brand is a big milestone for both companies,â€ said Ballmer. “Together we are offering customers a clear choice and a truly unique experience.â€

The homescreen of tiles, or apps, is a central element for the recently released duo. In fact, Windows 8X offers ample room for different tiles, which users can choose to make small, medium and/or large. That capability rivals the extra row provided by Apple’s iPhone 5. With a smaller screen, the 8S doesn’t offer as much room for apps, however, like the 8X, it offers customized capabilities.

The latest Windows phones are the first in an extensive lineup of Windows 8 phones set to hit the market later this year. The HTC Windows Phones will be available in November, but pricing information has yet to be determined. Take a closer look at this quick-and-easy breakdown of Windows’ newest creations:

The Windows Phone 8X has a thin build, weighing in at around 10 mm; is monochrome unibody polycarbonate.

As the smaller of the two devices, the 8S is a two-tone polycarbonate.