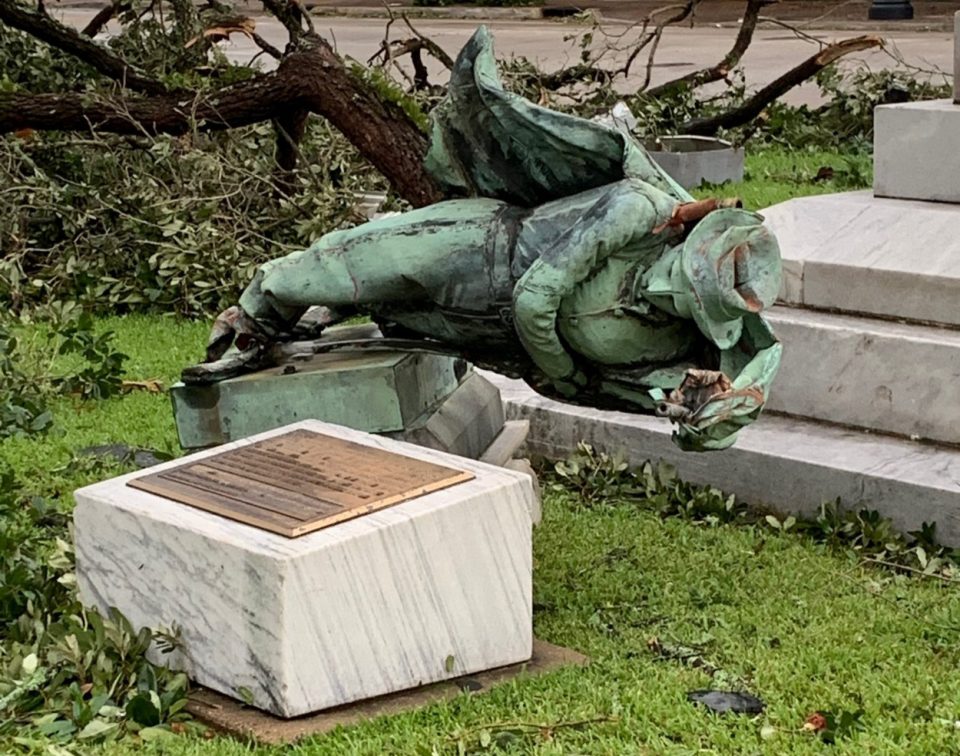 With all the controversies and debates surrounding the dismantling of Confederate statues across the country with the ongoing protesting of systemic racism, Mother Nature decided to make a decision herself. Just two weeks after local officials voted to keep a Confederate monument secure in Lake Charles, Louisiana, Hurricane Laura came through and toppled the monument with her strong winds according to Fox News.

The storm, which impacted land with 150 mph winds, touched down early Thursday morning and destroyed and ripped through buildings, vehicles, trees, and power lines.

My dad sent me some pics of the South’s Defenders monument in Downtown Lake Charles post-Laura and… I think some people may be happy about this. #HurricanLaura #HurricaneLaura2020 #Louisiana #lakecharleslouisiana #LakeCharles pic.twitter.com/dzHd5dSwNH

According to The American Press, The Calcasieu Parish Police Jury voted 10-4 two weeks ago to leave the statue where it stands on the grounds of the Calcasieu Parish Courthouse. The Jury had been receiving input from the residents in that locale about their thoughts as to whether to replace the statue or move it elsewhere since June 24th.

Parish Administrator Bryan Beam said that officials had received a significant amount of feedback in the form of emails, letters, postcards, hand-delivered notes, and voicemails from the residents.

Because the monument sits on parish property, it was up to the Police Jury to make any decision.

Can confirm, the confederate statue in Lake Charles that many were wondering about is gone, apparently a casualty of Hurricane Laura pic.twitter.com/xWzLpRAnBJ

The statue was dedicated in 1915 to honor the Confederate soldiers from the community and nearby parishes. It’s not the first time the monument was damaged by storm winds. It tipped over previously back in 1995 and it was repaired and reinforced.