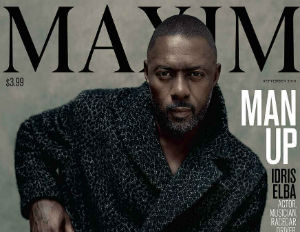 “We’ve never in U.S. Maxim history had a man on the cover solo,” MaximÂ Editor-in-Chief Kate Lanphear told Racked. “This is the very first time, and there was no one else in the world more bad-ass than Idris.”

“For me, he was really the perfect embodiment of what I think the new Maxim man is,” Lanphear continued. “He’s multi-dimensional, he’s complex, he’s sophisticated, but he’s down to earth. It was funny when on set, I was like, ‘Is there anything this guy can’t do?’ He’s an award-winning actor, he’s a DJ, his capsule clothing line for Superdry is about to hit stores. The guy broke the [British] land speed record which hasn’t been touched since like 1928. He’s sort of a living, breathing superhero.”

Popular both on and off screen, the British film star first gained U.S. critical acclaim as Russell ‘Stringer’ Bell on HBO’s the Wire, and has since starred in hit TV shows and films including BBC’s Luther, Thor, American Gangster and the Nelson Mandela biopic, Mandela: Long Walk to Freedom.

An Emmy-award nominated and Golden Globe Award-winning actor, he’s graced the cover of other popular magazines, including Essence, UptownÂ and Ebony, often inciting swoons and even marriage proposals from female fans around the world. A sure shoo-in to be the black James Bond if it were up to fans, Elba has expanded his career to the music industry as a DJ, and is slated to star in this year’sÂ Star Trek Beyond and Beasts of No Nation, a film based on 2005 novel of the same name by award-winning Nigerian-American writer Uzodinma Iweala.