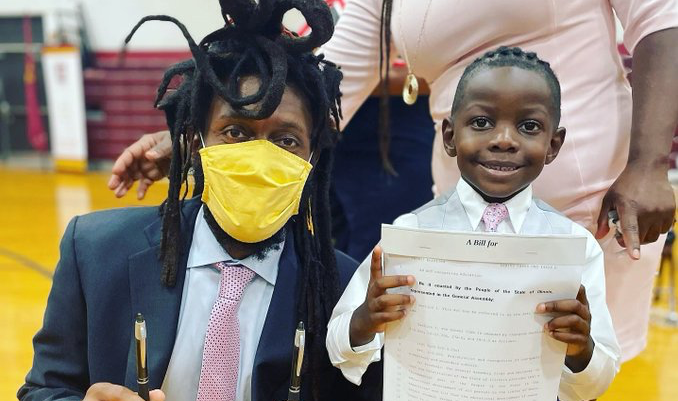 The law requires the state board of education to examine school handbooks yearly to ensure there’s no language that discriminates against cultural hairstyles, such as locs, cornrows, braids, and Afros.

Pritzker signed the measure on Friday after it was approved by the legislature last spring. The law, known as the Jett Hawkins Law, was named after Gus “Jett” Hawkins, a Black student who at 4-years-old was told his braids violated his Chicago school’s dress code. The young boy was advised to take them out.

His mother, Ida Nelson, brought the incident to the attention of the public. Within her awareness campaign, she explained how stigmatizing children’s hair could negatively affect their educational development. Friday’s bill signing was “monumental,” she said, according to NBC.

“For us, this is bigger than just hair. Our hair is an extension of who we are as a race and is deeply connected to our cultural identity,” Nelson said. “This is one huge step towards improving the mental health outcomes for our children, as it ensures that they will be in healthier learning environments.”

The legislation was sponsored by state Sen. Mike Simmons, a Black lawmaker who wears his hair in natural free-form locs. He knows first-hand what it’s like to be humiliated in front of classmates by school administration.

“To have authority figures belittle you and humiliate you in front of other people because of something that is God-given is entirely unacceptable,” Simmons told the Chicago Sun-Times.

Simmons helped create safer environments for Black children throughout the state to honor themselves and their ancestors.

“Black youth in school settings shouldn’t have to be restricted by outdated and often racist dress codes that only serve to humiliate students of color who want to wear their hair in a style that honors their heritage, ancestry, and culture,” Simmons told NBC.