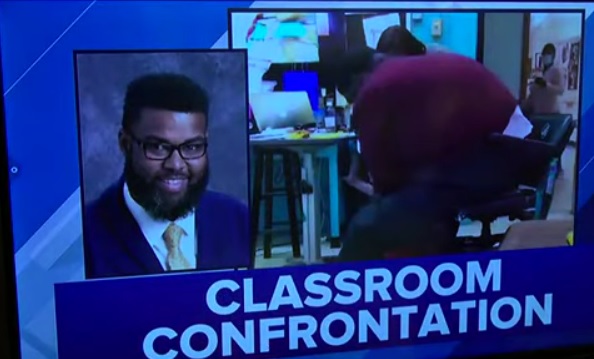 Christopher McNeil, a veteran educator in Salisbury, NC, has resigned his position as deputy principal of Knox Middle School after being caught on camera threatening and assaulting a student.

In a video posted on Facebook and shared by Charlotte-area station WBTV during a news broadcast, McNeil is seeing cursing at the student and confirming that he understood what the consequences of his actions would be even before he put his hands on the child.

According to The News & Observer, McNeil has since issued a statement to the media, which is at once remorseful and defiant, indicating that their are additional facts that, once uncovered, will allow him to reclaim his job.

“I am sad for the students and teachers at Knox Middle School who I have dedicated my life to supporting and helping,” reads the statement. “I pray for their safety and success every day. Many of those students have had a tough hand dealt them, and I have spent my career trying to provide love and support for students that are wrestling with many challenges they bring with them to school every day.”

He additionally maintained that he is “not afraid afraid of people hearing the entire story of what recently transpired in the classroom at Knox,” The Daily Beast reports.

McNeil had taught at Knox since 2016, and had been with the Rowan-Salisbury School System since 2005.

The school district has not indicated if any further disciplinary action will be brought against McNeil. Their only statement has been to affirm that the “safety of all students and staff are the highest priority of Rowan-Salisbury Schools.”