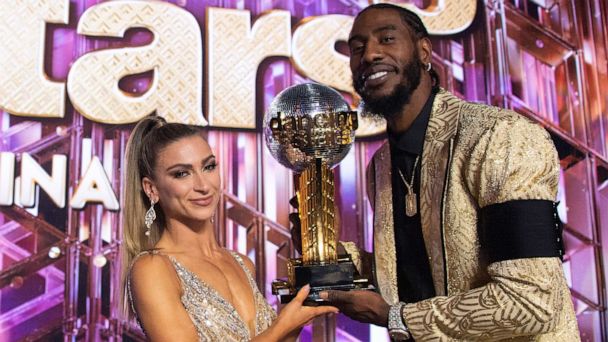 Iman Shumpert is giving his wife Teyana Taylor a run for her money after the NBA star made history on Dancing With The Stars.

The 2016 NBA champion impressed the judges and viewers with his amazing dance skills and standout performances alongside his partner and dance coach Daniella Karagach. Now, after weeks of hard work and dedication, Shumpert received the show’s championship mirrorball trophy and became the first NBA player to do so.

Shumpert recalled his journey to winning DWTS during a Tuesday appearance on Good Morning America.

“It’s literally been amazing to be a part of ‘Dancing with the Stars’ — all the people they had before me, and for them to even want me on the show is just … that was the best nod that I could’ve had,” Shumpert said.

Last week, Shumpert went viral with his performance to Kanye West’s “Dark Fantasy” that featured his wife on the vocals. Teyana Taylor has continuously praised her husband’s DWTS performance telling everyone that she knew all along what he was capable of.

“THE LEVEL OF PROUD I AM IS TEWWWWWW MUCH TO EVEN PUT IN WORDS,” Taylor captioned a congratulatory post to her husband. “WOW 🥺🥺🥺 congrats @imanshumpert @daniellakaragach i am proud but NOT shocked!!!!” she said.

Shumpert dedicated his win to his mom, who, along with his dad, had been coming to the live shows each week to cheer him on from the audience.

“My mother has been coming to support every week, her and my father. They weren’t able to be here tonight due to being exposed to the COVID virus,” he told People. “When they said our name, I couldn’t think about nothing but what they were doing right now, how they were feeling about it [and] being able to watch it.”

“I just can’t wait for my mom to actually get our hands on this trophy because this is a show that means a lot to her. It really makes her smile to see people be more than an athlete, more than an entertainer. More than whatever their respective field is. She loves when people grow, and people have progress…So this mirrorball is definitely for her.”