Video footage of Derek Chauvin’s mother portraying her son as a saint didn’t sit well with many people on social media.

In an attempt to appeal to the magistrate, Carolyn Pawlenty read a statement during Chauvin’s pre-sentencing hearing. The incredulous assessment of her murderous son appalled social media users.

“Derek has played over and over in his head the events of that day,” Pawlenty said during the five-minute-long speech. “I’ve seen the toll it has taken on him.

“I believe a lengthy sentence will not serve Derek well. When you sentence my son, you will also be sentencing me,” she continued. “I will not be able to see Derek; talk to him on the phone or give him our special hug.”

Pawlenty never mentioned George Floyd during the pandering speech or the devastation his family endured over his death.

She also described the man who knelt on Floyd’s neck for almost nine minutes as “thoughtful and honorable.”

Twitter users sounded off on the callous plea for leniency.

And now we know why Chauvin had the audacity to murder George Floyd in broad daylight in front of witnesses. There is no shame or self awareness in that family.

Parents who shield their sons from the consequences of their actions, who say “boys will be boys” – end up pleading, like #ChauvinMother for the world to participate in their delusions of having a good son.

We stand in reality where a man’s actions show his character. #LockHimUp

“I believe you are innocent” she says despite recorded proof of her sons guilt.

“You are my favorite son” she says to the murderer on live TV despite having a non convicted murderer son.

Notice no thoughts about George Floyd or how her other children might feel. pic.twitter.com/phTNBiUlpn 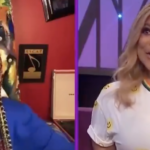