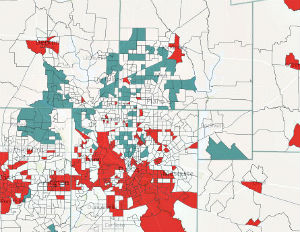 A new study from the Pew Research Center is showing that the color green may rule the world after all.

Sociologists are calling the trend “segregation by income.” They point to examples in southwest cities like Dallas, Houston and San Antonio. They claim that income has surpassed race in regards to segregation in America.

“If people with most of the money and wealth live separately from everyone else, there’s going to be less investment in the neighborhoods where the middle class and the poor live,” said Sean Reardon, a Stanford sociologist, to the Washington Post.

Check out more on this story at the Loop 21