Are International Students in Trumpâ€™s Crosshairs? 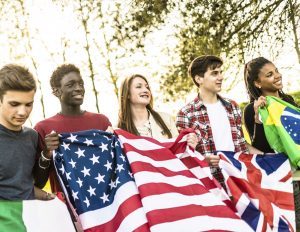 Throughout his campaign, Donald J. Trump spoke disparagingly of immigrants. His calls to “banâ€ Muslims and for “extreme vettingâ€ on visa applications have cast a pall of concern over some leaders in higher education. Now, many are questioning how the president-elect’s comments and policies will affect international college students.

Although U.S. K-12 scores are undistinguished on international exams, like the PISA, higher education in the U.S. has a good international reputation, and many overseas students want to come to the U.S. to study.

African students, too, seek higher education in the U.S. According to the University World News, the U.S. is the top choice, by far, of African students seeking to study for college abroad. The U.K. and Canada were distant second and third choice destinations.

Will Trump Cast a Pall on International Students’ Hopes?

“Career advancement is one of the prime motivations for international students to study in the U.S.,â€ Choudaha continues in the post. “Trump’s anti-immigrant stance may create stricter visa and immigration policies that may make it even more difficult for students to come to the U.S. and find internship and job opportunities.â€

The Irony of U.S. Anti-Immigration

The irony of Trump’s position is that, unless you’re a Native American–by that, I mean an American Indian–your forebears came to the U.S. from another country. Trump’s forebears are German; in the late summer, questions arose about the history of Melania Trump, a native of Slovenia. Her lawyer says she never worked in the U.S. illegally, but she has not released her records to substantiate those claims.