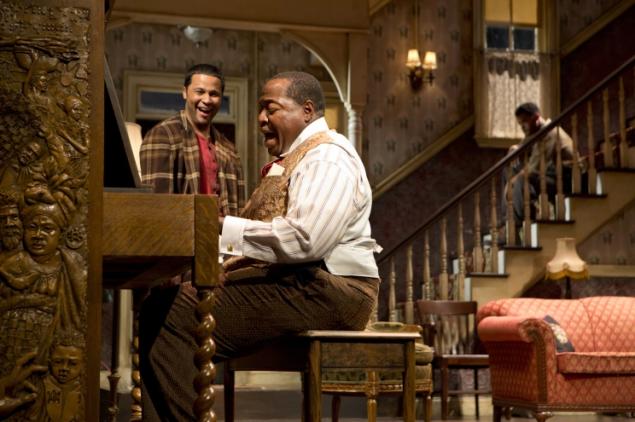 It was supposed to snow on the day after Christmas, and all it did was remind Jason Dirden why he was done with winters on the East Coast.

Dirden, who attended Morehouse and then the University of Illinois, plays Lymon in the Signature Theatre Company’s revival of August Wilson’s The Piano Lesson. By now, he was supposed to be home in sunny Southern California prepping for any number of auditions during Hollywood’s pilot season, when networks cast, produce and test new shows for television.

But just as circumstance and ambition alters the life plans of August Wilson’s characters on the page, so has the fantastic work of this production changed the plans of the artists in the first New York revival of The Piano Lesson since 1990.Â The play, extended a third time on November 29 through Jan. 20, is set in Pittsburgh and chronicles what happens when a family is confronted with divergent, but valid opinions on what to do with a 100-plus year-old family heirloom, the piano.

“We’re excited that it keeps getting extended because the of the of the richness of the written work, and everyone has been perfectly cast,â€ says Jason Dirden, whose real-life brother, Brandon, plays Lymon’s brother, Boy Willie. “And we all genuinely love each other. Normally it’s okay if a production ends, because that’s the business, but if it keeps getting extended because of the buzz surrounding the work … you know as an actor and an artist that you’re doing something that reflects the humanity that people are thirsting for.”

Until December 9, every ticket in the house was $25, underwritten by a private donor; director Ruben Santiago-Hudson (Stick Fly, Lackawanna Blues) and Signature’s Founding Artistic Director James Houghton believed in making the theatre accessible to the common man.

Santiago-Hudson and August Wilson had a long standing relationship, the height of which was the former’s Tony-award winning role in Seven Guitars. As the passionate, fiery and often demanding director of this production of The Piano Lesson, Santiago-Hudson says he demands the same level of love and passion from his actors that Wilson put into his characters.

“I look at it as part of my responsibility as a leader,â€ he says. “It is something to find actors who are worthy and competent, but another thing when they’re brimming with hope about being an artist, and not just being a star.”

“Mr. Wilson was extraordinary in his knowledge of the history of African American people. For him it was about passion and integrity and that’s why he recognized the importance of maintaining your culture and legacy, the things and the way that black people operate and do things. He wanted to say how we are, how we live, how we love and laugh. He was interested in our anger and joy. It was anthropology, more than history. He was preserving.â€

Santiago-Hudson had hoped to bring to a new audience an appreciation for August Wilson’s work, but also for nuanced aspects of African American culture that tell a multi-generational story. Hair, he says, for instance, has been done the same way in black families for hundreds of years. Like Wilson, Santiago-Hudson is dedicated to telling that story as a director.

“I pay attention to the specific part of our cultures not to enlighten the audiences, but to remind our own people and our young people.”

Santiago-Hudson has a busy 2013 ahead of him, which includes directing a production of Wilson’s Two Trains Running, and work with a new AMC show titled Low Winter Sun. That doesn’t mean that he’s necessarily looking forward to the production’s final show.

“Pleased can’t get anywhere near how I feel about this,â€ continues Santiago-Hudson, who estimates the play will have generated over $1.5 million in total revenue. “These actors are like family to me.â€ 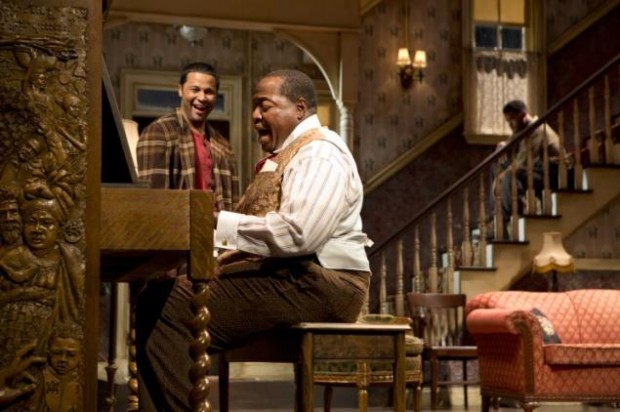 The actor James A. Williams, who plays Doaker Charles, the owner of the home which houses the piano, believes if that August Wilson could see this production, “he would be completely thrilled.”

“That’s for a number of reasons, one of them being that Ruben is such a master of interpreting his work,â€ Williams says. “I think he would love the fact the love and care he put into every aspect of the production, from the set to the selection of actors, to the venue. I think he would really like it. And of course he’d love the fact that it was brought back into the city after 20 years.”

The production, by design, has a mix of new and veteran talent. But Williams, who starred as Roosevelt in the prescient original production of Wilson’s Radio Golf, says it is a cast and experience worthy of August Wilson’s legacy.

“I don’t want to compare them because every cast is a unique experience,â€ Williams says, who is moving to New York from Minneapolis to take advantage of more acting opportunities. “I like to use the analogy of a family. Sometimes you run into cousins that you never met before, or interacted with. We’ve grown our family of what we call Wilson Warriors. Everyone brings something unique to the table, and that’s what makes the production soar like it does.â€

The production’s not only soared, but has exceeded the hopes and ambition of its director, perhaps the world’s biggest fan and supporter of President Barack Obama.

Well, except for one.

The Obamas famously took in August Wilson’s Joe Turner’s Come and Gone in 2009.

Might the President and First Lady be the honored guests of Santiago-Hudson during the last four weeks of the play’s run?

“I would be absolutely honored,â€ he says.