IRS To Auction Off Money Owed To Darryl Strawberry 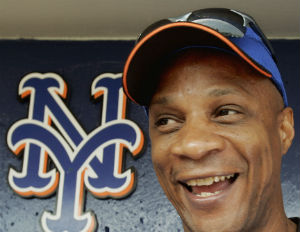 Ever had a longing to play professional baseball and make money like the majors? Now, according to the Internal Revenue Service, you can and don’t even have to swing a bat.

A new report from the IRS finds the government agency is auctioning off the remaining annuity from former MLB star Darryl Strawberry’s six-year contract with the Mets. The online posting on the U.S. Department of Treasury website finds the total value of the contract, which covered Strawberry’s 1985 through 1990 seasons, at $7.1 million. With nearly 40 percent of his $1.8 million team option ($700,000) deferred and put into an annuity with a 5.1 percent annual interest rate, a lucky auctioneer could potentially collect roughly $1.28 million, paid out by Sterling Mets L.P.

The parent company of the Mets will submit monthly installments to the winner of the auction, assuming there’s a realistic sale close by May 1, 2015. The winning bid, which cannot be less than $550,000, has to be approved by a court-appointed judge before the buyer begins collecting payments. For the fan who is tight on his or her purse-strings, the question may remain as to how could one even buy what was originally contractually obligated to the Met slugger in the first place?

Back in 2006, Strawberry was forced to give up a portion of his deferred money to his wife, Charisse, as part of their divorce settlement. Unfortunately, he never made any payments. Fast forward to 2010, when his ex-wife filed for Chapter 7 bankruptcy protection, and in doing so, asked for what was owed. In September of this year, a judge in northern Florida ruled that the annuity was the property of the IRS, not Charisse, because Darryl still had a looming tax debt that stemmed from 1989, 1990, 2003 and 2004.

By failing to pay $542,572 in taxes, according to court documents, the IRS was then able to take the remaining annuity from Strawberry’s contract and leverage it in auction. “Seizure and sale is the last thing we at the IRS want to do,â€ said Michael Devine, spokesman for the IRS’ division of Property Appraisal and Liquidation Specialists. “This happens when a person doesn’t dispute that they owe the money but can’t or won’t liquidate the property.â€ In that case, Devine said that the negligence has reached the point of a judge requiring the IRS to sell what was originally owned to Strawberry in his contract.